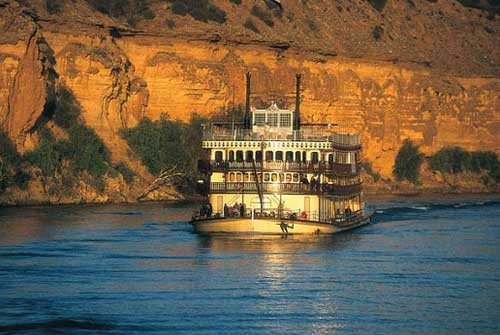 From its source beneath The Pilot, a landmark familiar to the cattlemen of the high country south of Mount Kosciusko, the Murray River flows 2,530 kilometres to the Southern Ocean at Encounter Bay.

The river meanders in a general west-north-westerly direction for some 2,200 kilometres before making an abrupt change of direction at North West Bend, near the small town of Morgan in South Australia.

Then, the last 330 kilometres of its journey, the river flows south to the sea, and with the abrupt change of direction comes a significant change in the nature of the river and the use of its water.

The Murray provides a rich habitat for both aquatic and riparian fauna and flora in a corridor through the semi-arid surroundings. A fertile riverine ecosystem has evolved in association with the Murray over thousands of years and is maintained by the river of today.

The Murrumbidgee and Darling rivers join the Murray in Wentworth, commonly known as the Murray Darling Junction. The Darling, bringing water from southern Queensland, contributes about 12% of the water in the Murray in an 'average' year, and the Murrumbidgee around 11%. The rivers which rise in the Grampians are lost in the Mallee region of north-west Victoria and do not reach the Murray. However, the channels of the Wimmera-Mallee Stock and Domestic Supply System provide water to a huge area of the Victoria Mallee and reach almost to the Murray in a number of places.

River cruises on the Murray are mostly on Paddle Steamers, recalling the era when these style of ships were the main means of transport in the Murray basin, carting wool and grain to the port at Adelaide.
The boats carry from 20 to 130 people so the experience is always intimate.

Cruises are generally round trips and depart from Echuca, Mannum and Murray Bridge

Weather
Seasons on the Murray offer quite different experiences. The Australian winter can be quite cold overnight but days are quite warm and this ranges through to the summer when days can be hot (though generally not humid) and nights warm.