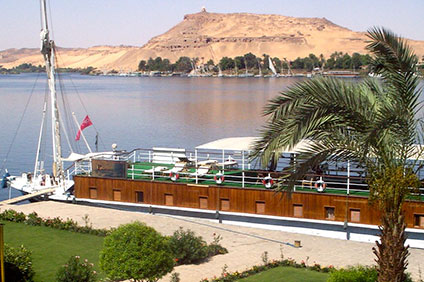 Egypt is a land of ancient splendour enriched by centuries of culture. Along the narrow ribbon of the 960mile River Nile, dynasties of Kings and Queens created monumental legacies that will fascinate you.

Nile cruises visit a wider variety of antiquities along the banks of the river. But equally important, they also allow the tourist to gain a prospective of the rural Egypt, where people live much the same way they did even thousands of years ago, in mudbrick homes, tending their fields with wooden plows and moving produce via donkey. It is a wonderful experience to sit on a shaded deck of a floating hotel, sipping an iced beverage while watching 5,000 years of culture slowly drift by.

Cruise Types
Cruising the Nile is one of the most pleaurable experiences that a traveller can partake in during a trip to Egypt. Cruises vary from 3, 4 or 6 night stays aboard ships, and the typical course runs from Upper to Lower Egypt beginning in Esna and concluding in Aswan. This alternative method of travelling through Egypt, provides travellers with a more unique and adventurous view of the country.

The usual cruise is aboard a Nile cruiser, often referred to as a floating hotel. Indeed, the better boats have most the accommodations of a land based hotel, including small swimming pools, hot tubs, exercise rooms, nightclubs, good restaurants, stores and even small libraries.Cruises range from 2 to 5 star.

Cruise Season
The best time to cruise on the Nile is from October to April when the weather is cooler and all locks operate. However cruises are available all year round.

Main Ports
The shorter tours usually operate between Luxor and Aswan, while the longer cruises travel further north to Dendera.
Luxor which is unique among the cities of the world. Wherever you tread, you feel you are experiencing the past and the present at one and the same time. There is hardly a place in the city that does not have a relic that tells of the grandeur of the Ancient Egyptians several thousand years ago. Luxor is the world's greatest open-air museum, filled with aweinspiring monuments of ancient civilization.

Weather
Throughout Egypt, days are commonly warm or hot, and nights are cool. Egypt has only two seasons: a mild winter from November to April and a hot summer from May to October.