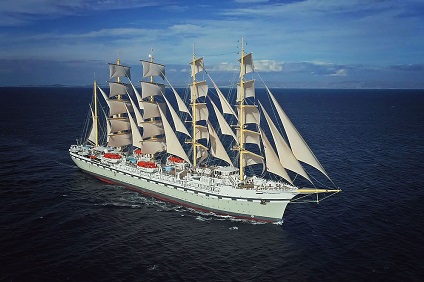 SOUTH AUSTRALIA & TASMANIA ADVENTURE - with BAROSSA, HAHNDORF & ADELAIDE EXTENSION
Cruise-Stay package includes:
- 16 night tall ship cruise aboard the NEW Golden Horizon by Tradewind Voyages from Sydney to Adelaide
- All shipboard main meals
- A selection of beers and wines with lunch and dinner onboard
- Use of onboard water sports equipment including water skis, pico sailboats, kayaks, knee & wake boards, windsurfing, stand up paddle boards, snorkel gear, a floating island and trampoline plus noodles for swimming
- Onboard resident destination expert speakers plus cultural performances reflecting the region visited
- Prepaid ship`s gratuities
- Port/govt. charges
- One way transfer from Adelaide port to hotel
- 5 nights accommodation in a 5-star hotel in Adelaide with daily breakfast
- Full day tour to the Adelaide Hills & Hahndorf with lunch: First stop - Mt Lofty lookout to view the amazing visas of the city of Adelaide. You will have a selection of tastings at local suppliers of cheese, chocolate and wine which is sure to please. You will enjoy a hearty German influenced lunch in Hahndorf, Australia`s oldest German village. There is free time to explore the many boutique shops, galleries, museums, cafes in Hahndorf before your return journey back to Adelaide via some of the picturesque villages of the Adelaide Hills.
- Full day tour to the Barossa Valley with lunch: After breakfast you will be collected from your hotel for a full day touring the premier Barossa Valley wine region. On this small group tour you will experience the panoramic vistas of iconic vineyards, historic buildings, food gardens, and charming villages of the Barossa Valley as we taste the best food and wine in the area. Includes tastings and visits at Barossa wineries including a Penfolds winery make your own blend experience.
- Morning walking tour of the Adelaide Central Markets with tastings of seasonal produce
- One way transfer from Adelaide hotel to airport.

Cruise & Stay 21 nights with Golden Horizon, the world`s largest sailing ship, on a cruise from Sydney to Adelaide plus 5 nights from Adelaide to explore the region.

16 Night Cruise sailing from Sydney to Adelaide aboard Golden Horizon. 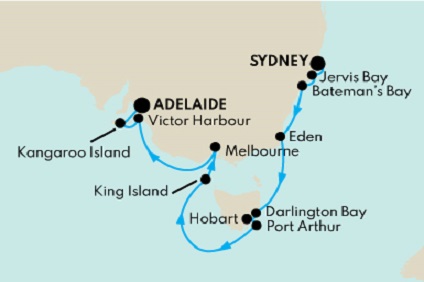 *Conditions Apply: All prices shown here are per person share twin (unless stated as single) in AUD, based on best known cruise fare at time of publication (26Mar21). Prices and routing is a guide only. Some cabins may have obstructed views. Cruise deposit, amendment and cancellation conditions apply. Travel agent service fees may apply. Special conditions apply - please ask for full details at time of enquiry. Not included: airfares, air taxes, travel insurance, meals/hotels/transfers other than those listed, shore excursions, gift shop purchases, drinks other than those listed. All passports, vaccinations and visas are the responsibility of the travelling guest to secure prior to departure. Transfer on arrival from airport is not included. Port transfer is included on exact package dates and hotel is at the discretion of our agency. Offer valid until 30Apr21 or until sold out/withdrawn and subject to availability at time of booking. We reserve the right to correct errors without penalty.