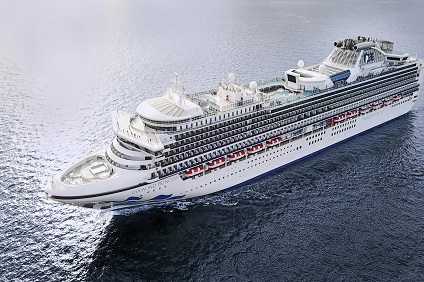 Diamond Princess is a luxury destination in itself. Wake each morning in anticipation of a new horizon. Take in the view from one of nearly 740 balcony staterooms. Indulge in a hot stone massage at the renowned Lotus Spa, enjoy fine dining in a formal or relaxed atmosphere and make it a cruise to remember.

Tokyo (Yokohama), Japan
Yokohama and Edo began life as sleepy fishing villages. That changed in the early 17th century after Tokugawa Ieyasu became Shogun. Edo became the center of political power in Japan, a position the city retained even after the restoration of Imperial rule in 1866.

Contemporary Tokyo may be the most astonishing city on earth. It's a paradoxical mix of ancient tradition and postmodern culture. The Ginza - an international shopping mecca - stands near the serene grounds of the Imperial Palace, and the hyper-speed of 21st century consumerism is mysteriously reconciled with the elegance and serenity of traditional culture. Tokyo provides the traveler with a dizzying experience.

With the Meiji Restoration of 1868, Edo was renamed Tokyo, the "Eastern Capital," to distinguish it from the old imperial capital at Kyoto, the "Western Capital."

Nagasaki, Japan
For most travelers, Nagasaki is a symbol of the horror and the inhumanity of war. An estimated 75,000 people perished in 1945 when the city became the second target of a nuclear attack. Today, Nagasaki's Peace Park and Atomic Bomb Museum draw visitors from around the world.

But this beautiful city on Kyushu offers other sights. Often described as the San Francisco of Japan, the city occupies verdant hills surrounded by a deep-water bay. For three centuries, Nagasaki was Japan's sole window on the world. The city is also celebrated as the setting for Puccini's opera "Madame Butterfly."

Busan, South Korea
The second largest city in South Korea, Busan is your gateway to a fascinating land whose culture is a unique amalgam of old and new. Modern high-rise towers dwarf ancient Buddhist temples. The city's bustling business district offers a stark contrast to the serene grounds of Yongdusan Park. In short, Busan is a microcosm of South Korea, a nation whose startling economic success often obscures one of Asia's most sophisticated and venerable cultures.

Busan was the scene of bitter fighting during the Korean War. The United Nations Memorial Cemetery marks the final resting place for the troops from 16 nations who gave their lives during the conflict.

Hakata, Japan
Since 1889, the old port of Hakata has been part of Fukuoka city, the major commercial center of Northern Kyushu. This region is perhaps the oldest settled area in Japan, and for centuries Hakata served as Japan's cultural and commercial gateway with China and Korean. The twin cities played another major role in Japanese history - it was here that Kublai Khan launched his two invasions of Japan in the 13th century. Two anchor stones from the great Mongol fleet destroyed by the famous typhoon or Kamikaze are still on display at Hakata's 8th century Kushida Shrine. Beyond the hustle and bustle of today's modern metropolis, visitor will still discover and enjoy the serenity of ancient shrines, superb formal gardens, and a duo of fascinating museums.

When Hakata and Fukuoka merged in 1889, the combined metropolis was to be named Hakata. Until a group of disaffected samurai from Fukuoka - an important castle town in feudal times - intervened to ensure the new city's name honored their old home.

Kagoshima, Japan
From the 12th century to the Meiji Restoration of 1868, Kagoshima was the chief stronghold of the mighty Shimazu clan. The city lies at the top of the Satsuma Peninsula, a mountainous, geothermal wonderland of hot springs and geysers. The area is also rich in modern Japanese history: Saigo Takamori and the Satsuma samurai were leaders of the Meiji Restoration that toppled the shogun and restored the Emperor to power in 1868. In 1877, dissatisfied with the direction of the new government, Saigo led the Satsuma Rebellion, which ended in his death and the final defeat of the samurai.

The symbol of Kagoshima is Sakura Jima - the volcanic island that sits just offshore. The volcano has erupted over 30 times in recorded history.

Miyazaki (Aburatsu), Japan
Boasting the second warmest temperatures in Japan, Miyazaki offers a playground of outdoor activities that take full advantage of its balmy breezes and aquamarine waters. A resort atmosphere permeates Miyazaki, fragranced by blooms from local botanical gardens. Emerald green golf courses, some of the best surfing in Japan, and a zoo with the largest number of flamingos in captivity in all of Japan add to the festive atmosphere. A Peace Tower, built with stones from throughout Asia anchors the city and Heiwadai Park and is one of the most noted landmarks. Visit Haniwa Gardens where over 400 replica haniwa (burial statues) make for wonderful photo opportunities, and see Miyazaki's history and culture on display at The Miyazaki Prefectural Museum of Nature and History, located on the same grounds as the picturesque Miyazaki Shrine. For a change of pace, stop into the Miyazaki Science Center where an animatronics "Dr. Cosmo" welcomes you to this hands-on museum. Looking for a little adventure? Try a side trip to Aoshima, a small island just off the coast of Miyazaki City, and enjoy the charming Aoshima Shrine and over 400 species of subtropical plants. The options are endless in Miyazaki to soak up local color…or just soak up the sun!

Beppu, Japan
Ominous steam rises from the Japanese island of Kyushu where Beppu lies in wait. But not to worry - this legendary tourist town is renowned for its healing geothermal waters and spas. Overlooking Beppu Bay to its east and protected from the west by dramatic mountain peaks, this exotic city is blanketed with misty turquoise waters and elegant Japanese foliage. Its main attraction is the "Hells of Beppu," a collection of nine stunning onsen, or hot springs, some of which feature geysers and colorful waters in shades from white to copper to sapphire. The springs' names, including Kamado-Jigoku (Boiling Hell) and Oniyama-Jigoku (Demon Mountain Hell), are somewhat misleading as all of the hot springs are breathtakingly beautiful rather than frightening - though your nose may cower and crinkle at the sulfurous odor they emit!

*Conditions Apply: Prices are per person, capacity controlled and listed in Australian dollars twin share including port taxes. Prices may fluctuate if surcharges, fees, taxes or currency change, and may be withdrawn at any time. Prices shown here are not shown in real time. While we endeavour to keep our pricing as up-to-date as possible, the advertised prices shown here may differ from the live prices in our booking system. The prices shown are for a cash payment. Credit card fees of up to 2.5% will apply. Offer subject to live availability at time of booking. Prices are per person twin share based on best available cruise fare, inclusive of all discounts unless otherwise stated. All offers are capacity controlled and can be withdrawn or modified at any time without notice and subject to availability at time of booking. Outside and Balcony cabins may have obstructed views and Suite cabins comprises Junior Suites, Mini Suites and any other type of suite that represents the best value for each cruise. Unless otherwise stated, onboard gratuities are NOT included. ~Specialty restaurants may incur a surcharge. ^Bonus Credit is in US Dollars, a total per twin cabin and is non-transferrable and non-refundable. Onboard credit cannot be used at the medical centre or casino. All unused on board credit is forfeit on final night. Bonus Onboard Credit offer is subject to the discretion of Princess Cruises and may be withdrawn at any time without prior notice. To be read in conjunction with the Princess Passage Contract available at princess.com/legal/passage_contract/ which passengers will be bound by. All passports, vaccinations and visas are the responsibility of the travelling guest to secure prior to departure from Australia. Some cruise lines reserve the right to impose a fuel levy if the NMEX price reaches a certain level - please check with your consultant at time of booking. Cruise deposit, amendment and cancellation conditions apply. Travel agent service fees not included. Special conditions apply - please ask for full details at time of enquiry. Offer ends 14Feb22 or until sold out/withdrawn from sale. Please note only residents with an Australian address are eligible to book Australian rates in Australian dollars. This cruise package is provided by Seven Oceans Cruising, please ask your travel agent to contact us for more information