Upgrade Your Horizon with a FREE 2-Category Suite Upgrade aboard any voyage — plus enjoy 50% Reduced Deposits. On 340 selected cruises 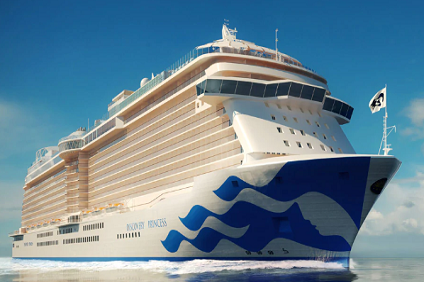 Discovery Princess, the third vessel designed from the ground up with Princess MedallionClassTM and the final Royal-class ship, will continue to deliver an array of innovative new experiences. Enjoy 270-degree sweeping views from the largest balconies at sea, unwind in ultimate comfort at The Sanctuary, and indulge your senses with world-class dining options from Michelin-star chefs. Plus, Princess Live Entertainment presents spectacular new productions that can only be seen in our state-of-the-art Princess Theater.

San Antonio
Nestled between rolling hills topped with colorful houses and meandering coastal dunes, the bustling city of San Antonio enjoys its reputation as the gateway to Chile's central valley and the capital of Santiago. With a population of over five million people, Santiago sprawls at the feet of the snow-capped Andes. Inland lies the sun-kissed wine regions of Casablanca and Maipo Maipo Valley, Chile's internationally renowned wine district.

Callao
In 1535, Francisco Pizarro labeled the open plains where Lima now stands as inhospitable. Despite the verdict of the great conquistador, Lima became the center of imperial Spanish power, a "City of Kings" where 40 viceroys would rule as the direct representatives of the King of Spain. With independence in 1821, Lima became Peru's capital. Near Lima, one of the world's most desolate deserts is home to the famed drawings of Nazca. These drawings inspired Erik von Daniken's best-selling book "Chariots of the Gods." With mysteries seeming to be part of Peru's history, perhaps these "drawings" are in fact "the largest astronomy book in the world."

Puerto Quetzal
Guatemala is located in the northern-most part of Central America and is one of the largest countries in this region. It boasts 37 volcanoes, a rich Mayan heritage, Lake Atitlan, and one of the best-preserved colonial cities in Antigua. Once the center of the impressive ancient Mayan civilization, Guatemala was conquered by Spanish conquistador Pedro de Alvarado in 1524. During the second half of the 20th century, it experienced a variety of military and civilian governments as well as a 36-year guerrilla war. These issues have now faded into the past and today Guatemala is a thriving democracy with many varying landscapes, activities and historical venues waiting to be discovered. Enjoy an African safari in the hot and tropical Pacific Coast or explore the cool Mayan highlands where Lake Atitlan and the colonial city of Antigua are located. There is something for every traveler's interest in Guatemala.

Cabo San Lucas
Millennia ago, Cabo San Lucas was part of the Mexican mainland. Then a massive rupture of the San Andreas Fault sent the waters of the Pacific crashing into the newly formed depression, creating the Sea of Cortez and the Baja Peninsula. Lying at the very tip of Baja, where the Pacific meets the Sea of Cortez, Cabo San Lucas - or "Cabo" - is one of the premier resort destinations in the Western Hemisphere. Swim in the transparent waters, marvel at the wealth of marine life, relax on one of the white-sand beaches or try your hand at some of the finest sportfishing in the world.

Los Angeles
The City of Angels always hovers between dream and reality. Once a near-forgotten colonial outpost, the pueblo metamorphosed into an agrarian paradise before reinventing itself as a movie colony. Perhaps no other city owes so much to the technological innovations of the 20th century, from the automobile to the airplane. Little wonder that LA is oft described as the "dream machine." In LA, reinvention is a way of life. Yet this talent for change has created a city with a rich ethnic diversity and a sizzling culture. LA is the source for trends that migrate across the country and then the world. Where else can you enjoy a Thai taco or munch on a kosher burrito? Or travel from downtown's high rises to the beaches of Malibu, shopping in Beverly Hills along the way? *Conditions Apply: Prices are per person, capacity controlled and listed in Australian dollars twin share including port taxes. Prices may fluctuate if surcharges, fees, taxes or currency change, and may be withdrawn at any time. Prices shown here are not shown in real time. While we endeavour to keep our pricing as up-to-date as possible, the advertised prices shown here may differ from the live prices in our booking system. The prices shown are for a cash payment. Credit card fees of up to 2.5% will apply. Offer correct as at 11Oct19 and subject to live availability at time of booking. Prices are per person twin share based on best available cruise fare, inclusive of all discounts unless otherwise stated. All offers are capacity controlled and can be withdrawn or modified at any time without notice and subject to availability at time of booking. Outside and Balcony cabins may have obstructed views and Suite cabins comprises Junior Suites, Mini Suites and any other type of suite that represents the best value for each cruise. Unless otherwise stated, onboard gratuities are NOT included. ~Specialty restaurants may incur a surcharge. ^Bonus Credit is in US Dollars, a total per twin cabin and is non-transferrable and non-refundable. Onboard credit cannot be used at the medical centre or casino. All unused on board credit is forfeit on final night. Bonus Onboard Credit offer is subject to the discretion of Princess Cruises and may be withdrawn at any time without prior notice. To be read in conjunction with the Princess Passage Contract available at princess.com/legal/passage_contract/ which passengers will be bound by. An ESTA visa is required for travel to the USA & Canada and is the responsibility of the passenger to obtain this before travel..All passports, vaccinations and visas are the responsibility of the travelling guest to secure prior to departure from Australia. Some cruise lines reserve the right to impose a fuel levy if the NMEX price reaches a certain level - please check with your consultant at time of booking. Cruise deposit, amendment and cancellation conditions apply. Travel agent service fees not included. Special conditions apply - please ask for full details at time of enquiry. Offer ends 07Feb22 or until sold out/withdrawn from sale. Please note only residents with an Australian address are eligible to book Australian rates in Australian dollars. This cruise package is provided by Seven Oceans Cruising, please ask your travel agent to contact us for more information