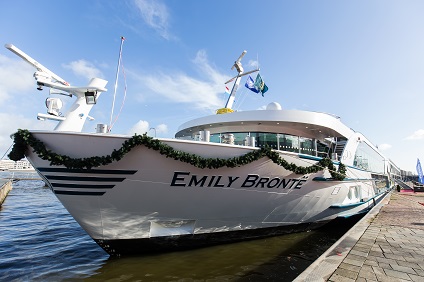 
THE BLUE DANUBE Cruise-Only package includes:
- 7 night river cruise round trip from Budapest aboard ms Emily Bronte
- All meals from dinner on your day of arrival until breakfast on your day of departure
- Welcome Cocktails & Dinner plus Captain`s Dinner
- Complimentary onboard tea & coffee
- English-speaking crew and knowledgeable local guides
- Complimentary onboard Wi-Fi
- The services of a Riviera Travel River Cruises cruise director and tour manager
- Included visits and shore tours: Guided tour of Vienna, city of Strauss and home of the Hapsburgs | Live classical quartet recital on board | Tour of baroque Bratislava, capital of Slovakia | Cruise through the scenic Wachau, Austria`s premier wine region | Visit to Melk Abbey, central Europe`s most spectacular baroque monastery, and one of its premier academic institutions | Visit to medieval Durnstein where Richard the Lionheart was imprisoned whilst returning from the Crusades | Tour of Salzburg, birthplace of Mozart and one of Austria`s most beautiful cities | Explore the amazing basilica at Esztergom, Hungary`s oldest cathedral | Tour of Budapest, Pearl of the Danube
- Port charges

ADD ON A DRINKS PACKAGE - An onboard Drinks Package:
Available for all new 2020 departures is an onboard drinks package (valued at $199 per person). This includes draught beer, non-alcoholic beer, soft drinks, juices, red/white/rose house wines, and wine recommendations from the menu - served with lunch and dinner onboard your ship. If you would like to add on this package please advise prior to departure from Australia.

Day 1 Budapest
Moored in Budapest, the dedicated crew will welcome you on board, ensuring you settle into your comfortable and extremely well-equipped cabin and familiarise yourself with the ship, your first-class floating hotel. There’s always a sense of expectancy and excitement on the eve of a cruise and after an excellent dinner in the stylish restaurant, conversation is sure to revolve around the delights ahead of you.

Day 2 - Esztergom
Experience one of the great joys of cruising as you awake in a completely different location. Overnight we slipped upstream to Esztergom, one of Hungary’s oldest towns, a royal capital during medieval times and today the seat of the country’s archbishop. Esztergom is famous for its enormous neoclassical basilica, Hungary’s largest church, standing sentinel over the Danube on the border with Slovakia, and boasting one of the world’s largest altarpieces and a wealth of priceless religious artefacts. The castle is also worth exploring; it was the seat of government until the Ottomans invaded in the 16th century. Nestling below are myriad atmospheric churches resonating with the enchanting sounds of choirs, adding to the unmistakable Central European atmosphere. This is the best of provincial Hungary and is little changed since Habsburg times. As you enjoy your first lunch on board we gently leave Esztergom in our wake, affording a fascinating opportunity to compare the different landscapes, towns and villages of Hungary on one river bank and of Slovakia on the other.

Day 3 - Bratislava
This morning, you explore Slovakia’s fast emerging capital city, Bratislava, on a guided tour. Until recently swathed in the drab uniformity of communism, the city has shrugged off its greyness, rekindling the splendour of its imperial past, so evident in its beautifully restored baroque old town. Equally impressive is the great 17th century fortress commanding expansive views across the Danube. This afternoon you cruise into Lower Austria, a peaceful, bucolic region and home to some of the country’s best wines. By now, the stresses of everyday life seem very distant as you absorb life on the river, children playing on the banks, young couples strolling arm-in-arm like generations before them, vignerons carefully pruning their vines, cobbled quaysides lined by half-timbered buildings teem with life - with no one giving you a second glance. You will marvel as the captain skillfully navigates the ship with such easy confidence along the serene river and into the fascinating locks as we cruise towards Dürnstein whilst enjoying another superb dinner.

Day 4 - Durnstein & Melk
As well as being a delightfully picturesque town in a landscape of forested hills and vineyards, Dürnstein is known principally for two things: first, for the ice-blue tower of its abbey, which dominates the view, and second, for the castle where Richard the Lionheart was imprisoned in 1192 after being shipwrecked on his return from the crusades then captured by his enemy, Leopold V, Duke of Austria. Set on a rocky outcrop high above the river, the castle is now ruined, but it’s easy to imagine England’s legendary monarch seething with frustration far from home, while waiting for his family to raise funds to pay his ransom.

After lunch you visit the remarkable Melk Abbey. Nothing quite prepares you for your first sight of this enormous honey-coloured building, standing resplendent above the surrounding countryside. Originally a castle, it was gifted to the Benedictine Order in the 11th century and, although reconstructed in Baroque style during the 18th century, it has remained a monastic school and monastery ever since. The Abbey is renowned for its 214-yard-long Emperor’s Gallery lined with portraits of Austrian royalty, many fine rooms and an ornate library containing over 100,000 volumes, including a unique collection of medieval manuscripts. After we re-join the ship, dinner is served during the final part of our cruise upstream through the pretty Nibelungengau, immortalised in the music of Wagner.

Day 5 - Salzburg or Linz
Reaching Linz, you will have the choice to stay in the city and take a guided walking tour, exploring its charming baroque old town. At its heart you’ll see one of the finest squares in Austria, lined by grand pastel-coloured facades with an impressive central Trinity Column of white marble, crowned by a gilded sunburst. There’s also the fortress-like castle, built high above the city by Emperor Friedrich III, now a museum housing a fine collection of nineteenth and twentieth-century artworks.

Alternatively, we drive to Salzburg, once an independent state whose archbishops turned it into one of the most sophisticated cities north of the Alps. Dominating the skyline is one of Europe’s largest stone fortresses, the Hohensalzburg, while beneath its walls church domes and spires rise from the delightful Altstadt, or Old Town. Then there’s the wonderful Hellbrunn Palace and the splendid formal gardens of the Mirabell Palace – a must for horticulture fans.
This morning, discover some of the city’s main sights in the company of an expert local guide, then you’re free to explore as you wish. Everywhere there are sights associated with the city’s most famous resident, Mozart, who played the harpsichord aged three, composed rudimentary music at five and wrote his first opera when he was 11!
Please note lunch is not included on this full day excursion to Salzburg; however, the ship will offer a packed lunch. We return to the ship for another splendid dinner.

Day 6 - Vienna
For many, today’s visit to Vienna will be one of the highlights of the cruise. The city’s very name provokes images of elegance, fine music, wide boulevards, Baroque architecture and a rich tapestry of peoples who were drawn here from all corners of Europe. For 200 years until the First World War, Vienna was the cultural centre of Europe and many of the showpiece buildings, galleries, aristocratic palaces and magnificent churches you see today were built to reflect its imperial status.

The city’s most iconic monument is the breathtaking Saint Stephen’s Cathedral, whose striking multicoloured roof and huge Gothic South Tower dominate the skyline. There’s also the colossal Hofburg, the former royal court that is now home to a collection of museums, the Crown Jewels and the Spanish Riding School, and where the Vienna Boys’ Choir performs. Then there are the lavish Imperial Apartments and an outstanding collection of relics of the Holy Roman Empire, including, allegedly, the sabre of Charlemagne himself. The Kunsthistorisches Museum, which contains the world’s fourth largest collection of paintings, is just across the road.

This morning we have a tour with a local guide offering insights into why Vienna is one of Europe’s great capitals – the seat of the Habsburg emperors and home to some of the world’s finest classical composers, including Beethoven, Brahms, Mozart and, of course, a whole family of Strausses. During the afternoon you’re free to explore as you wish. Take a stroll in the Prater, notable for the huge Ferris wheel that features in several Cold War spy thrillers. Or, for something quite different, visit the Schönbrunn Palace, a former royal residence now housing a range of world-class museums and galleries. Perhaps, though, just take a stroll through Vienna’s atmospheric side streets, enjoy a coffee and a slice of delicious Sachertorte in one of the extraordinarily ornate coffee houses, or admire the skill of the street entertainers and even the occasional opera singer

This evening we’ve arranged truly the ‘icing on the cake’: no visit to Vienna is complete without a live musical experience, so after dinner we have a classical recital on board. To hear this exquisite music played in the city of its creation makes a wonderful finale to the day.

Day 7 - Budapest
Enjoy a leisurely morning as we cruise majestically through Hungary’s peaceful pastoral landscape towards Budapest. After lunch we enjoy a sightseeing tour of this captivating city, which truly lives up to its reputation as the ‘Pearl of the Danube’. The twin cities of Buda, built around the hilltop fortress, and Pest, with its wide boulevards, were fought over through the centuries. The Ottomans ruled here for 150 years before being ousted in the late 17th century, but their legacy lives on in the many thermal baths fed by hot springs, giving rise to Budapest’s other sobriquet – the ‘City of Spas’. After the end of Ottoman rule, Budapest became an imperial city of the Habsburg Empire, attracting great cultural and commercial wealth.

Castle Hill is Budapest in microcosm: two churches, seven museums and a theatre among streets and squares with their own special atmosphere and a dramatic view across the river to the awe-inspiring neo-Gothic Parliament Building. Budapest’s endless galleries, museums, outstanding Art Nouveau architecture and excellent shopping offer a fittingly elegant end to your Danube cruise. This evening’s Gala Dinner closes with a Hungarian folklore show, giving you time to bid farewell to your travelling companions and reflect on all the inspirational places, sights and sounds you have experienced on a truly ‘imperial’ cruise.

Day 8 Budapest
After breakfast this morning your friendly crew bid you farewell before you disembark the ship. 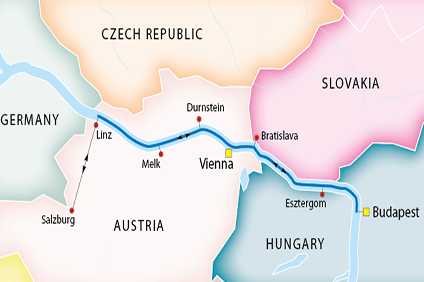 *Conditions Apply: All prices shown here are per person share twin (unless stated as single) in AUD, based on best available cruise fare at time of publication (05Aug20). All prices based on cash payment - credit card fees may apply. Cruise deposit, amendment and cancellation conditions apply. The following are NOT included in this package - 1. Ships gratuities 2. Drinks aboard river cruise other than those as listed as included in a Drinks Package (if you choose to pay the additional fee) 3. Any meals other than those as stated 4. Transfer to port to join cruise 5. Transfer from port to depart cruise 6. Travel insurance - proof of which is mandatory prior to documentation release 7. International or domestic airfares. Travel agent service fees may apply. Special conditions apply - please ask for full details at time of enquiry. All passports, vaccinations and visas are the responsibility of the travelling guest to secure prior to departure from Australia. Offer valid until sold out/withdrawn from sale and is subject to availability at time of booking. We reserve the right to correct errors without penalty.