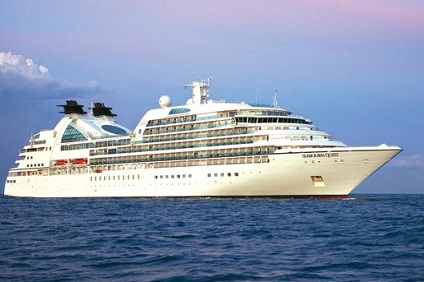 Seabourn Quest is the third iteration of the vessel design that has been called “a game-changer for the luxury segment.” Built at the T. Mariotti shipyard in Genoa, she was named in Barcelona on June 20, 2011. True to her Seabourn bloodlines, wherever she sails around the world, Seabourn Quest carries with her a bevy of award-winning dining venues that are comparable to the finest restaurants to be found anywhere. Seabourn Quest offers a variety of dining options to suit every taste and every mood, with never an extra charge.

Miami, Florida, US
Miami is the busiest cruise port in the world, hosting a myriad of ships year-round from all over the globe. Although it is technically not on the Caribbean Sea, no other American city exudes more of the diverse tropical appeal of the Caribbean. The city is home to a large and vibrant immigrant population that blends snowbird refugees from more northern climes with emigres from all Latin America and the Caribbean, as well as sizable groups from Europe, the Middle East and Asia. From the hot-blooded Art Deco haunts of South Beach to the natural wonders of the UNESCO-inscribed Everglades and the laid-back charms of the Keys, South Florida offers a bounty of appealing attractions that make an extended stay in the region nearly mandatory for those either embarking or disembarking here.

Fuerte Amador, Panama
Formerly a fortified armory, this newly developed port is the portal to colonial Panama City and an in-depth look at Miraflores Locks. Also from here, you can visit an Embera Indian village.

Manta, Ecuador
Manta is Ecuador's second largest port, north of Guayaquil which is the largest, and just south of the equator. With a population of approximately 140,000, Manta is a commercial center for fish and fruit, particularly bananas and plantains, which thrive in the tropical climate. However its beaches and quaint fishing villages have long attracted tourists. Shrimp, tuna and giant blue and striped marlin run in abundance in the waters off its coastal plain. Manta's culture is a vibrant patchwork of the heritage and traditions of the country's early Native American, Spanish and black African slave settlers.

Callao (Lima), Peru
A 45-minute drive from the port city of Callao brings you to exciting Lima, the City of Kings. From its founding in 1535 until today, it remains one of the most important cities in all South America. The handsome old buildings from the earliest colonial days surrounding the Plaza de Armas contrast with the soaring modern towers rising in the newer sections of the city.

Islas Ballestas, Peru
The Ballestas Islands are an offshore cluster of rocky outcroppings teeming with seabirds, penguins, sea lions, dolphins and other wildlife. On shore, Pisco dates from 1640, and its Plaza de Armas is a Spanish colonial treasure. Many visitors take the opportunity to take a scenic flight over the huge, mysterious Nazca Lines pictographs etched into the nearby desert surface 2,000 years ago. And still more belly up to a bar to sample a Pisco Sour cocktail made with the Pisco brandy distilled from locally grown grapes.

General San Martin (Pisco), Peru
Pisco dates from 1640, and its Plaza de Armas is a Spanish colonial treasure. Another treasure is the Ballestas Islands, an offshore cluster of rocky outcroppings teeming with seabirds, penguins, sea lions, dolphins and other wildlife. Many visitors take the opportunity to take a scenic flight over the huge, mysterious Nazca Lines pictographs etched into the nearby desert surface 2,000 years ago. And still more belly up to a bar to sample a Pisco Sour cocktail made with the Pisco brandy distilled from locally grown grapes.

Iquique, Chile
Iquique was the undisputed capital of the saltpeter, or nitrate industry from the 1860s to 1920. The town's historic center evinces this period with its many fine palatial buildings. After the Germans invented chemical fertilizer shortly before WWII, the nitrate industry collapsed and the city fell into decay. Today Iquique's economy is supported by its fishing industry and its tax free status.

Driving outside the city into the desert, one can find many interesting well-preserved ghost towns that remain from the nitrate industry's hey-day. Some, including Humberstone, are now classified national monuments.

Antofagasta, Chile
A busy port hard by the arid and mysterious Atacama Desert of Northern Chile. With the wealth generated by minerals flowing from the barren land, they’ve managed to build a pleasant town of parks and plazas, conquering, for a while, the emptiness beyond. See the English clock ensconced in the Plaza Colon by British residents, and the uniquely hybrid architecture of the Customs House. In the manicured gardens and verges along Avenida O’Higgins, soil imported as ballast aboard visiting ore ships was used to augment the desert sands and nourish the greenery.

Isla Pan De Azucar, Chile
Where the Atacama Desert meets the sea, small “Sugar Loaf Island” sits just offshore of the sprawling National Park named for it. The region is a unique ecosystem where flora and fauna are sustained by the Camanchaca mists from the sea. A variety of cactuses thrive here, and dramatic rocky outcrops are interspersed with wide sandy beaches. On the island, breeding colonies of sea lions, sea otters, pelicans and Humboldt penguins lounge in protected peace, fussing, chattering and cavorting as you float just offshore. (Landing is forbidden.)

San Antonio (Santiago), Chile
This large, modern port serves Chile’s capital, Santiago, a city with Spanish colonial charm and a vivacious spirit. Encircled by the Andes and the Coastal Range, Santiago is centered around the Plaza de Armas, with several of the city’s landmarks: the 18th-century Metropolitan Cathedral the Palacio de la Real Audencia from 1808, the City Hall and the National Museum of History.

North of San Antonio lie the picturesque old port and university town of Valparaíso and the colorful seaside resort of Viña del Mar. In between the coast and the capital are valleys filled with some of Chile’s most famous wineries, all inviting you to come and taste.

Puerto Montt, Chile
Puerto Montt sits beneath a skyline of snow-capped volcanoes. Volcan Osorno towering 2,652-meter (8,701’) above the town, erupted in 1835 and was described by naturalist Charles Darwin. The town sits at the gateway to a myriad of outdoor adventures including an exhilarating white-water rafting trip, tranquil fly fishing and scenic hiking in Alerce Andino National Park. Petrohue Rapids and Lake Llanquihue, are set within a rural landscape of sheep farms. A walk around town allows for an encounter into the South American way of life. A vibrant fish market, selling everything from seaweed to salmon to spiny crabs sits astride a street lined with craft stalls packed to the brim with brightly colored woolen ponchos. South American fur seals lounge along the seawall promenade as colorful fishing boats lay at anchor offshore. Puerto Montt is an eclectic mix of new and old, refined and rustic.

Reloncaví Sound is a panoramic vista of high volcanoes. To the south, is scenic Moraleda Channel and the entrance to the picturesque Chilean Fjords.

Cruising Chilean Fjords
Your ship threads among the islands and waterways along Chile’s wild southern coastline. Looming, glacier polished walls of rock rise sheer from the water, furred with vegetation wherever a crevasse or groove offers foothold. Lacy veils of waterfalls tinsel the surfaces and make ripples in the mirrored sea below. In the distance, a lone fishing boat plies patiently by. Rings of brightly colored floats mark the circular fish farms encircling silvery schools of salmon to feed a hungry world outside. In other places, the shoreline is dense with twisted dwarf forest, buffeted by the endless passing winds. Steamer ducks splash frantically out of the way as your ship glides toward them, and a sea lion’s head leaves a wake of silver as it swims away. A scene of primeval nature unreels as you watch, bewitched, from your lofty vantage point.

Punta Arenas, Chile
Punta Arenas is the most important port and commercial center for the immense Patagonian agricultural area of Chile. The economy revolves around the sheep raised on the expansive pampas. Located on the Strait of Magellan separating the mainland from the island of Tierra del Fuego, the city proclaims itself the southernmost city in the world. Its colonial history may be explored in the splendid Plaza de Armas, in the magnificent tombs of the Pioneer Cemetery and the opulent Braun-Menendez Mansion. The heritage of Ferdinand Magellan’s exploration can be recaptured at the Nao Victoria ship museum. Fort Bulnes national monument memorializes the earliest colonial period, while the offshore Los Pinguinos Natural Monument preserves the thriving seabird and sea lion colonies around Magdalena Island. This is also the port from which a full-day flight excursion takes visitors to the majestic peaks and picturesque lakes and wildlife of the Torres del Paine National Park.

Antarctic Experience
Antarctica! The name alone conjures up images of boundless ice, towering icebergs, comedic penguins, epic snowstorms, great sailing ships held tightly by ice and the hardy explorers striving to survive wrapped in thick, heavy parkas. All of this is, or once was, true. Today, vessels have changed and the level of safety on a journey to ‘The Great White Continent’ has increased immensely. Antarctica is the truest of wild places, the majesty of its pristine natural landscapes is second to no other location on earth.

The animals that thrive in the rigors of the Antarctic climate are present in such great numbers and concentrations that they must be seen to be believed. This untouched oasis harkens back to a time when the world was untouched by humanity, pure in its natural innocence. Antarctica has been a source of natural inspiration for as long as humans have been aware of its existence -- and it may produce in you one of the most exceptional emotional sensations it is possible to experience on our great planet.

South Georgia Experience
South Georgia may include various experiences. The exact itinerary is subject to permissions, weather, ice conditions and time available. The daily program will be determined by the Expedition Team and is subject to site availability.

Montevideo, Uruguay
Tucked in between Brazil and Argentina, the republic of Uruguay has nevertheless maintained its own identity and traditions. As South America's second smallest country, it has been called a city surrounded by a big ranch. Montevideo has also been referred to as "The Switzerland of South America," for its same secretive bank system guaranteed by law. Uruguay is principally middle class and boasts the most highly educated citizens on the continent.

Buenos Aires, Argentina
Referred to as the "Paris of South America", Buenos Aires is considered as one of the most livable cities in South America. Although the bustling capital city has just under 3,000,000 inhabitants and a population density of 13,680 inhabitants per square kilometer (34,800 per square mile), it was rated in 2018 as one of the top cities on the continent for its ‘quality of life’. Twinned with world cities such as Moscow and Miami, Buenos Aires displays through its architecture, a cultural past rooted in both the Old and New Worlds. A vibrancy for life can be seen everywhere. Crowded public markets, street performers dancing the tango, colorful graffiti-style street art, ultra-modern buildings, a dramatic skyline and a bustling port. Culturally, Buenos Aires has the busiest live theatre industry on Earth, outperforming New York, London and Paris. Every weekend, over 300 theatres are active with plays and productions.

Buenos Aires was founded in 1580 by Spanish explorer Juan de Garay, and has changed hands many times during its history.