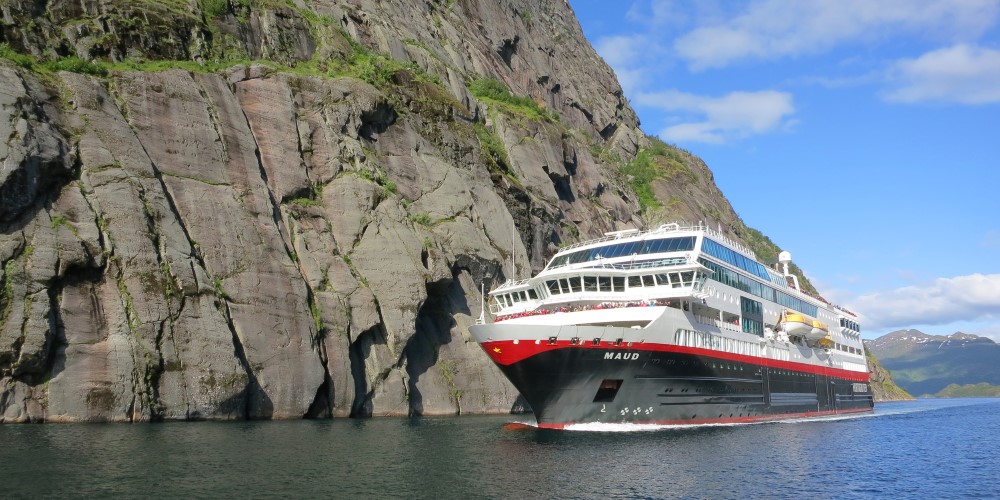 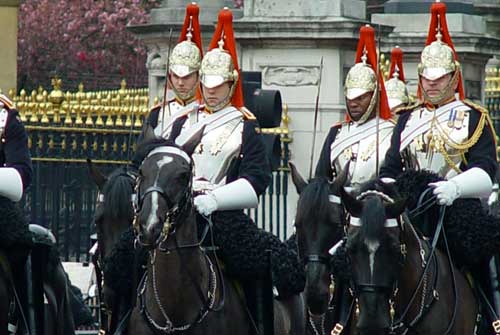 Day 1 Dover
This expedition cruise begins as we set sail from Dover and make our way along the south coast of England.

Before joining your ship today, perhaps take time to explore the coastal town of Dover with the magnificent, medieval Castle.

As we head out to sea, passing the famous white cliffs of Dover, stretch your sea legs and get to know MS Maud. Find the amenities you like best – the Science Center, the Explorer lounge, or maybe your favourite spot out on deck.

Day 2 At Sea
Enjoy an idyllic day at sea with plenty to do.

Meet our Expedition Team, who prepare you for exciting adventures ahead. Listen in on talks by these experienced explorers who share their extensive knowledge, or maybe you just want to kick back and relax.

Admire the views, try some of the ship’s cuisine that caught your eye on the menu, or settle into a good book while enjoying this day at sea.

Day 3 Fishguard
This small, typical fishing village, seems to have stood still in time. With its charming main street and lush green surroundings, Fishguard lies between the Preseli Hills and the coast of Pembrokeshire. Split in two by a steep, winding hill, the “new” town sits on a clifftop commanding spectacular views.

Steeped in history dating back as far as the 10th Century, Fishguards past includes Viking raids and Norse settlements, and has the dubious accolade as the site of “last invasion of Britain”, by the French in 1797. The local library houses ‘The Last Invasion Tapestry’, a 100-foot long masterpiece which took 4 years to complete, and records the scenes of the invasion. The town offers insight into this fascinating history as well as being charming with local shops, cafes and restaurants to enjoy.

Explore the surrounding areas with walks through the ancient woodlands and the nearby Gwaun Valley which flows between Fishguard and the Preseli Mountains. With its unique atmosphere, there is plenty of wildlife and prehistoric sites to explore, the valley is listed as one of the most important meltwater channels in Britain and dates from the last Ice Age. At a more sedate pace, wander the gardens of Dyffryn Fernant or Penlan Uchaf, with lovely views across the valley.

At just six miles long and one mile wide, it is ideal for exploring by bike or on foot on one of the many walks in the area. Cliff-top walks are waiting, or choose from many rambling cross-island trails.

Visit the Seabird centre and lighthouse -a unique and fully operational “upside-down” lighthouse. Here, close-up views of the seabird colonies are enjoyed, as well as spectacular panoramic coastal views. Or stroll to Mill Bay where you can watch the frisky seals either at play or just relaxing in the sunshine.

Thousands of seabirds congregate on the island to breed from late April to July, including puffin, guillemot, kittiwake, razorbill and fulmar. Rathlin Island is also home to Northern Ireland's only pair of breeding choughs, and, more recently, calls by the secretive corncrake have been heard here for the first time in 30 years.

Day 5 Isle of Iona, Staffa
World famous for its religious connections, Iona was settled in 563 AD by the Irish missionary, St Colomba.

The much-restored Abbey is one of Scotland’s most historic and sacred sites, and still remains a place of pilgrimage and peace. Spend time exploring the Abbey and learn about its fascinating history, visit the ancient graveyard where 48 of Scotland’s kings are buried or take a short walk to the highest point on Iona offering spectacular 360 degree views.

Views from Iona’s beaches stretch west towards the Outer Hebrides, resulting in places bearing emotive names such as ‘The Bay at the Back of the Ocean’.

Early afternoon, if conditions allow, we will spend time doing a ‘scenic sail by’ of the cave-riddled island of Staffa. The uninhabited island is home to the cathedral-like Fingal’s Cave, immortalised by Mendelssohn’s glorious ‘Hebrides Overture’. The basalt columns here are a northern extension of the Giant’s Causeway. Named by the Vikings from the old Norse for pillar or column, Staffa has been visited by Queen Victoria, Sir Walter Scott and Samuel Johnson, and is one of Scotland’s most famous islands. Fingal’s Cave is best viewed from the sea where the colour of the waters within the cave and its rising columns are at their most impressive.

Day 6 St Kilda, Hirta Island
Any visit to this distant and wild archipelago, with its breathtaking sea cliffs, is totally weather-dependent. As a UNESCO double World Heritage Site and the ‘jewel in the crown’ of the National Trust for Scotland, it is an unforgettable experience. The outlying stacs and islands, which are the remains of a volcanic crater, provide ledges for thousands of nesting seabirds. Minke whales are frequently seen around the swirling waters of the archipelago.

Once home to Britain’s most remote island community, it was evacuated in 1930 at their own request after 5,000 years of continuous habitation. The tiny museum that remains is a record of how hard life was on this exposed island.

Day 7 Stornoway, Lewis
Originally a Viking settlement, Stornoway is the main town of the Western Isles and the capital of the Isle of Lewis, which is the largest and most northerly of the Outer Hebrides. A bustling harbour and waterfront with museums and art galleries are overlooked by the handsome Lews Castle which we invite you to explore with us.

Further afield are mills and cottages where hard-wearing Harris Tweed is woven. There are tiny folk museums, the world-famous Callanish Standing Stones, described as Scotland’s Stonehenge from around 3000BC, and the mysterious Carloway Broch - the best preserved fort in Scotland dating back more than 2,000 years.

Day 8 Islay
Pronounced “EYE-la” was once the seat of the MacDonalds, Lords of the Isles. This is ‘whisky island’, world famous for its peaty single-malt whiskies and its many local distilleries is one of the largest Hebridean islands.

Offering a diverse landscape, together with ancient Celtic ruins, Islay is a stop-off for migrating birds, making it ideal for seabird spotting along its many superb cliff-top walks.

In the charming little town of Bowmore, there are a handful of small shops, a round church housing no corners, and some say the locals are the friendliest in Britain.

Day 9 Douglas, Isle of Man
With a rural landscape and rugged coastline, the Isle of Man became a designated Biosphere Reserve in recognition of its marine and coastal ecosystems. With more than 100 miles of stunning coastline and rugged cliffs, the island has a spectacular landscape of rolling hills, moorland and heath, waterfalls, pebble-dash beaches and coastal paths – an ideal destination for exploring.

Our location in Douglas enables us to explore the island which has a strong Celtic and Viking heritage. There are Viking museums to visit, or board a historic steam train, or discover the castles of the island, or just enjoy strolling through the town and local surrounds at your leisure.

Nearby Douglas Head is a rocky outcrop overlooking Douglas harbour, which has some of the best views on the Isle of Man. Pass through the ornate gate, visit the unique Grand Union Camera Obscura and continue on to the Douglas Head Lighthouse, built in 1857.

Visit the delightful harbour community of Peel with the impressive Peel Castle, originally constructed by the Viking King of Mann, and dating back to the 11th Century as the original place of worship and stronghold.

On previous calls to the Isle of Man, we have joined the local community and taken part in a beach clean-up as well as engaging in a tree-planting ceremony along with the Department of Forestry who have identified a site where they intend planting 84,000 trees as a national forest.

The famous TT races are held on the island from late May to early June.

Day 10 Waterford
The oldest city in Ireland, founded by the Vikings in at the start of the 10th century, Waterford and its surrounding areas is a short drive away and make this the ideal destination to visit.

With its strong Norse roots, explore the Viking Triangle, so named for the 1,000 year old Viking walls once surrounding the area and is an integral part of the cultural and heritage of Waterford City.

Steeped in history and set amongst beautiful Irish countryside, the region is renowned for its excellent archaeological treasures, parts of the ancient walled core still remaining as well as Norman forts and majestic, medieval abbey ruins and ancient monasteries.

Visit the nearby 12th century Kilkenny Castle, one of the earliest Norman stone castles, stroll through quaint villages and charming hamlet towns nearby or take in the beautiful scenery with a cycle along the along the Waterford Greenway. A visit to the Copper Coast UNESCO Geopark offers spectacular scenery and sights of the Copper Coast, named for the vast.

Not to forget home to the famous, finest crystal since 1783 a visit to the House of Waterford Crystal Visitor Centre would not go amiss.

Day 11 Isles of Scilly
This enchanting archipelago off the coast of Cornwall is home to outstandingly beautiful, uncrowded and unspoilt islands and around 140 islets. Covered in heathland, with magnificent sandy beaches, these islands are surrounded by rocks and reefs and offer picturesque coastal walks.

Ideal for exploring on foot, the small town of Tresco is home to the world famous Tresco Abbey Garden with its 20,000 plants from 80 different countries. You can also explore the castle ruins, the Valhalla Museum or stroll along the tropical-like white beaches. Should conditions allow, we aim to do a beach clean-up on this charming island.

We will split our time in the area and you may also choose to visit St. Mary’s - the largest of the islands – with its rocky coves, archaeological sites and charming Hugh Town. Explore the town and sample some of the freshly caught seafood whilst enjoying the delightful views of the island.

Alternatively, join one of our optional excursions for a trip around the islands, visiting shipwreck sites, spotting seals basking on the rocks and cruising around the bird sanctuary of Annet to observe the puffins and numerous other breeding seabirds.

Day 12 Dartmouth
A picturesque sail-in marks our arrival into the delightful waterfront town of Dartmouth. Set on the banks of the River Dart, this enchanting town is steeped in maritime history along with a rich cultural history.

With a commanding location above the town, dating back to 1863, the magnificent building of Britannia Royal Naval College trains the finest officers in the world, and is set in 126 acres of landscaped gardens offering views over the river, the town and out to sea.

Buckfast Abbey, historic castles, steam train rides and magnificent walking trails are just a few of the many compelling attractions waiting to be explored during our visit.

We will be anchored in the centre of the town with a short tender ride ashore, allowing you easy access to visit the town on your own to stroll through the lanes and enjoy the quaint shops. Or join one of our impressive excursions to learn more about this fascinating town and the scenic Devonshire surrounds.

Day 13 Dover
We pass the white cliffs of Dover during the early morning hours and dock at the city’s harbour. After breakfast, it’s time to leave your home for the past 13 days. 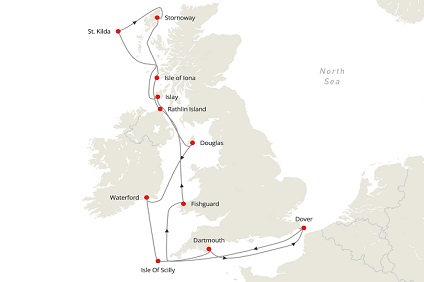