A trailblazer in the exclusive world of all-suite, all-balcony ships, Seven Seas Voyager® exceeds even the loftiest expectations for luxury. Considering her size, the amenities are surprisingly plentiful and include four main dining venues where you can dine wherever, whenever and with whomever you choose. With 447 international crew members attending to a mere 350 suites, personal service is exceedingly indulgent throughout.

Puerto Montt
The first German colonists arrived to this area in 1852, and have remained to the present day, a small but influential percentage of the 130,000 inhabitants. The town spreads along a narrow seaboard and climbs the slopes enclosing it to the north. Since 1985, the city has experienced considerable growth and development, fueled by more than 30 salmon farms, in addition to forestry, fishing industries and service companies. A gateway to Chile’s picturesque lakes and spectacular indigo mountains.

Punta Arenas
Punta Arenas or ‘Sandy Point,’ is the most prominent settlement on the Strait of Magellan and the capital of Chile’s Magallanes y la Antártica Chilena Region. Founded in 1848, Punta Arenas was originally a remote military garrison and penal colony. Today, it is the charming gateway for a number of exhilarating experiences viewing the awesome majesty of Torres del Paine with its soaring peaks and rugged beauty .

Ushuaia
Here at the bottom of the world, mountains and sea come together like in no other place in America. Considered to be the world’s southernmost city (though that is up for a heated debate), Ushuaia is the capital of the Argentine province of Tierra del Fuego. The town itself has an interesting museum and a variety of shops selling everything from souvenirs to duty-free luxury items.

Port Stanley
Located about 480 miles northeast of Cape Horn, the Falklands Islands are the most easily accessible sub-Antarctic islands. The English navigator, John Davis, aboard the Desire made the first confirmed sighting of the Islands in 1592. The Falklands have been a disputed area between Great Britain and Argentina. Argentina invaded and occupied the islands in April 1982, spurring a British counter-invasion that June. With all the charm of a rural English village, Stanley is characterized by its bright rooftops, red telephone boxes, shops, and local pubs. Nearby is the Grave Cove penguin colony.

Buenos Aires
Rivaling Madrid or Paris for sophistication and culture, the tree-lined boulevards of fashionable Buenos Aires are home to superb restaurants, art galleries, museums, the magnificent Teatro de Colon and the brightly colored houses of La Boca barrio. As the sun sets, Recoleta awakens and the passionate melodies of the tango rise from the milangas along San Telmo’s cobbled streets. Few cities in South America share the ambiance, lifestyle and amenities that make Buenos Aires so endearing.

Porto Belo
Discover the quaint fishing village charm and lively beach atmosphere of Porto Belo, tucked at the base of lush mountains on a sparkling emerald bay. Take a few moments to peruse the wharf shops before shuttling off to the main square in downtown Porto Belo. Look for unique Brazilian beachwear, jewelry and hand carved wooden art pieces. Enjoy a tour of the area. Then, visit Quatros Ilhas Beach to enjoy fresh seafood, shrimp, and the famous Caipirinha made from Brazil’s sugar cane liquor, cachaca at a beachside café. Relax to the soft whisper of the waves in this beach lover’s paradise.

Rio de Janeiro
There’s a little bit of Carnival celebrated here everyday. From its famous beaches to its iconic statue of Christ the Redeemer, Rio radiates an air of exuberance that is hard to find anywhere else. Make the scene on trendy Ipanema or take a cable car to the summit of Sugar Loaf Mountain and enjoy the amazing views. Sway your hips to the rhythm at a samba show or enjoy the tranquility of king Dom João VI’s Botanical Gardens and verdant Tijuca Forest. 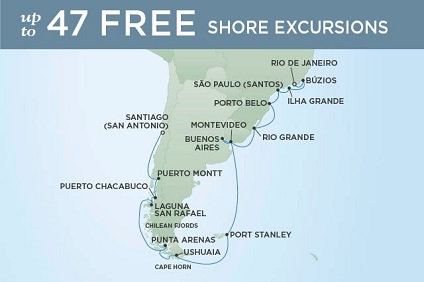