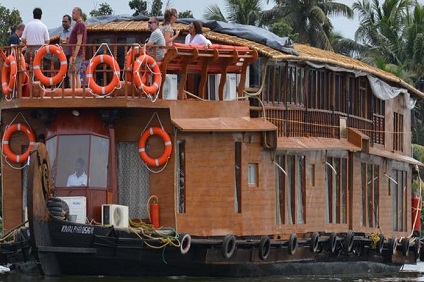 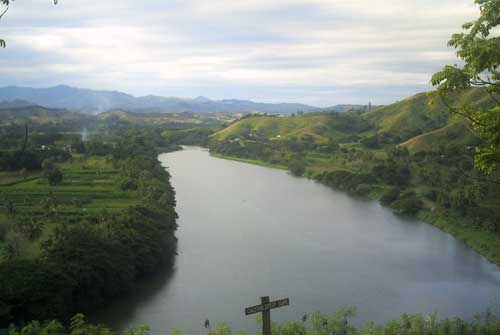 7 Night Cruise sailing from Kochi to Alleppey aboard Vaikundam.

7 Night Cruise sailing from Kochi to Alleppey aboard Vaikundam.

Day 1: Boarding at Marad, Cochin
This morning, we will drive to the village, Nettoor, to visit a Kalari – an authentic training centre for traditional martial art Kalaripayattu, which is said to have given birth to all martial arts. After witness the performance, we will drive to nearby Maradu village to board RV Vaikundam.

Our welcoming team on-board will help you with smooth check-in, followed by the safety briefing.

We set sail, gently cruising by the islands interspersed along rivers, lake, coastal estuaries and lagoons, leaving the skyscraper lined horizon of the city of Cochin behind. Enjoy a traditional Kerala lunch and relax onboard.

Our guide onboard will talk about Cochin, the Queen of the Arabian Sea, and its geographical, cultural and social significance.

We drop the anchor at the ancient village, Vaikom. We will have a short walk to visit the cultural centre to watch Kathakali, the traditional dramatic and mimetic dance form, which plays stories from epics. It is a unique blend of dance, music, action, literature and make-up.

We will experience the short tuk tuk ride to the ancient temple of Shiva. The architecture of temples in Kerala is based on ancient science of construction and geographical features of the land. As per the traditional architecture, each element of temple represents an element of human body and, a temple is not only the space for spiritual enlightenment but also the venue for harmonious social networking.

Return to boat and relax.

Day 2: Vaikom – Chenganda – Kumarakom
After breakfast we sail to Chenganda village. The people of this rustic village are having a laid-back and peaceful life.

We will visit the village spending time with the coir weavers, the shell harvesters and farmers, engaging in conversation about the riparian life and watching various indigenous techniques of fishing. Chenganda village is devoted to making coir, which tomorrow might save the world from plastic

Return to our boat and cruise to Thanneermukkom. The barrage at Thanneermukkom built across Vembanad, the largest lake of Kerala, divides the lake into two; one half with perennial salty water and the other with fresh water enriched by rivers.

This afternoon, we will visit the house of a Syrian Christian family for a home hosted lunch. This house is located on an island which was made by the men of the house, by reclaiming land from Backwaters. A walk in the farm will be educative. The hostess will demonstrate the preparation of traditional Syrian Christian cuisine. You may also try your hand at cooking and listen to the story of her family, of three generations of laborious men, and equally strong women who supported their pioneering spirit.

Day 3: Kumarakom – Kavalam
Early this morning, we set out by country boat to watch the migratory and endemic birds of Kumarakom, which is a cluster of lagoons of Lake Vembanad, at the backdrop of mangroves, paddy fields and coconut groves. Waterfowl, cuckoo, owl, egret, heron and the water duck are some of the endemic species seen here. Parrots, teal, larks, flycatchers, wood beetle, and other birds are seen here during their respective migratory seasons.

Return to the boat, refresh and while cruising an elaborate breakfast will be served.

While cruising the lake we pass by expanses of the oldest paddy cultivating regions reclaimed from the bed of the Lake – Vembanad. These paddy fields are below sea level. Lunch will be served while cruising. We arrive in Kavalam where river Pampa reverses its course and drain into Lake Vembanad.

You may take the ferry to explore the region, walk along the dykes surrounding the expanses of paddy fields and interact with the farmers and women’s collective.

As we cruise, along the way we interact with toddy tappers, who collect the sap of coconut palm and make the alcoholic beverage – Toddy. Learn about the process of making toddy and an opportunity to taste it! We continue the cruise till dusk, through the remote interiors of Kavalam.

Day 4: Kavalam – Kainakari – Mankompu
After breakfast cruise to Kainakari, passing through the oldest and core regions of paddy cultivation on reclaimed land from the lake.

We will take the country boat to cruising through the narrow canals, get closer to the laid-back, yet harmonious, life along the way.

We will stop to visit the Chavara Bhavan, the ancestral home of Saint Kuriakose Chavara which is now preserved as a museum. Saint Chavara, the first canonized Catholic male saint of Indian origin, was the co-founder of the first congregation for men, the Carmelites of Mary Immaculate – C.M.I, and of a similar one for women, Congregation of the Mother of Carmel C.M.C. He had dedicated his life for the upliftment of the poorest among the poor.

Return to boat. After having lunch onboard, cruise to Mankompu village.

While cruising, we will have an informative lecture by an Ayurveda doctor to know about this 5000-years old Science of life – Ayurveda, which is still being practiced by the local people.

Cruise to Mankompu village where we will witness a cultural performance.

Day 5: Mankompu – Champakkulam – Changankari
After early breakfast, we drive to an ancient village, Aranmula, famous for its metal mirrors. The technical know-how behind the making of this unique metal mirror is confined to only some households of master craftsmen in Aranmula. These mirrors have the distinctive feature of 100% reflection unlike the common mirror. These mirrors are unique to this locale and haven’t yet been replicated anywhere else in the world.

We will then visit the ancient temple of Lord Krishna “Aranmula Sree Parthasarthy Temple”. The story goes that the temple had its idol brought here in a raft made with “Aru (six)” pieces of “Mula (bamboo)”. This is what gave the place Aranmula its name as well. Dedicated to the Hindu Deity Lord Krishna, the temple is situated on the banks of the Pamba River.

We will have a traditional lunch at a beautiful house of a local family, situated along the bank of Pampa River.

Post lunch we will visit the institute intended for promotion and presentation of Traditional Architecture and Mural Painting.

Return to boat and enjoy a relaxing cruise watching the laid-back village of farmers.

We will drive back to board our boat and will sail to Champakkulam village. Kerala’s old spice trade used to pass through this town enroute to Cochin and other ports on the west coast. Champakkulam settled more than 1000 years ago by Syrian Christian traders, who later converted to Roman Catholicism under the Portuguese. We will visit the St. Mary’s Church, one among the oldest churches in Kerala, the St. Mary’s Church or Champakkulam Church in Alappuzha is believed to be one of the seven established by St. Thomas in AD 427.

We may meet and interact with the tailors and the local artisans (open on weekdays) who make biblical heroes.

Continue cruising to the remote village –Changankari, passing through the serene canals.

Day 6: Changankari – Thottappalli
Early this morning we can enjoy a leisurely walk in the laid-back village.

After breakfast, we will continue our sailing towards the coastal village, Thottappalli, passing by the spillway at the southern area of Kuttanad, which prevents the saline water at river mouth from flooding the low-lying paddy fields. We get to know about indigenous practices of paddy cultivation on reclaimed land at lower altitude than the Sea.

Honouring your cruise with us, we plant a sapling of coconut. Coconut tree is considered as the ‘Kalpavriksha ‘or the Divine tree of Kerala because all parts of coconut tree are useful in one way or the other: the water inside is a healthy drink; the fresh kernel and the oil extract from dried kernel are inevitable components of South Indian cuisine; fibre from the coconut husk is used to make coir, mats and geotextile; the palm fronds are used for thatching roof; the wood suitable for making furniture and all the dried parts of coconut make good firewood. Last, but not the least, the toddy – the boost for the labourers toiling in the fields.

We will drop anchor at Thottapalli and will enjoy a walk to the beach to see the life along the coast.

Return to the boat and dinner on-board.

Day 7: Thottappalli – Karumadi – Kanjippadom
After breakfast, we will board the vehicle for a short drive (approx. 30 min) to visit an ancient sacred grove where serpents are worshipped, the only temple in Kerala having female priests. We will walk inside to see the rituals going on. The cult of snake worship in Kerala is closely interwoven with the life of the people and is a component of its rich cultural heritage.

We then continue our drive (approx. 45 minutes) to an ancient village Mannar (45minutes) which is famous for bell metal craft to watch casting of traditional lamps, ornate locks, bells, cauldrons and various types of vessels being used in temples. Fine clay, which is easily available on the bank of the river and rivulets flowing through the region, is being used for the lost wax method of casting of these bell metal products (The workplace remains closed on Sundays and religious holidays).

Return to the boat for lunch as we sail to a quaint village Karumadi. We will take a walk around a small shrine preserving the ruin of a sculpture of Buddha that dates back to the 11th century, made of solid black granite.

We will drop anchor at Kanjippadom, where we will explore the village by a leisurely walk. We will also visit the boat building yard to understand the traditional method of wooden boat building by joining wooden planks using coir, cotton and natural resin known as Kettuvallom.

Tonight, we celebrate our sojourn over farewell dinner on board RV Vaikundam.

Day 8: Kanjippadom – Punnamada & Disembark at Alleppey
After breakfast we cruise to Punnamada lake. Punnamada Lake is the venue of the annual Snake boat race which held on 2nd Saturday of August every year. People gather in large numbers to watch nearly 100 ft long boats compete against each other to the tune of old boat songs.

We disembark by 9.30 AM. After taking a walk through the market place of Alleppey, depart for onward journey. 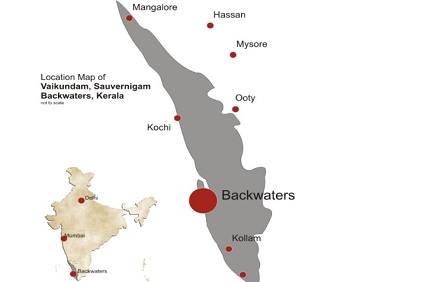