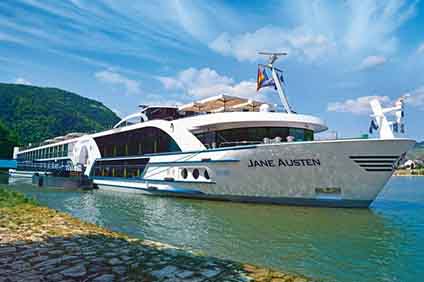 DAY 1 – EMBARK IN PARIS
Embark the ship in Paris, moored near the city centre. The friendly crew will welcome you on board, helping you settle into your spacious and exquisitely furnished accommodation – you’ll immediately feel at home. This evening you enjoy your first sumptuous dinner, served in the ship’s restaurant.

DAY 2 - LES ANDELYS
During the night our ship slips her mooring and, as you enjoy breakfast, the landscape passes by serenely and you quickly get used to this luxurious sightseeing experience. Rounding a sweeping bend so typical of the Seine, we reach the town of Mantes-la-Jolie with its imposing church – so large and architecturally impressive it could be a cathedral – while straight ahead is a medieval stone bridge. The central section of the bridge was destroyed during the Second World War and never repaired – it’s the first of many poignant reminders that this region of France has been a battleground for centuries.

Beyond Mantes we encounter another typical feature of the Seine as it flows seaward – picturesque chalk cliffs, almost resembling a giant’s teeth. Beautiful villages like La Roche Guyon slide by, surrounded by bocage countryside of lush pastures and high hedgerows, countless cider orchards, half-timbered barns and ancient wooden farmhouses. We’re truly in the heart of one of France’s historic and stunningly attractive dukedoms – Normandy.

While you’re enjoying your first delicious lunch, the captain has skilfully berthed at Les Andelys, a small town dominated by one of the most spectacular sights along the entire valley – Château Gaillard. This remarkable castle guards the apex of the river bend and was built by Richard the Lionheart in the 12th century to defend Rouen from the French. Besieged many times during the turbulent history of northern France, Château Gaillard is now one of the most dramatic ruins in the region.

A much-appreciated feature of our river cruises is that they’re thoughtfully planned and paced, allowing time to explore the many places of interest we visit. So this afternoon you are free to roam the town of Les Andelys at your leisure, investigating the Gallo-Roman remains, churches and museums of two former fishing villages that grew together, or alternatively join the short drive up to Château Gaillard. From this spectacular vantage point – probably the finest of the entire cruise – you enjoy stupendous views across the countryside.

During your second excellent dinner we slip our mooring unobtrusively, and what could be better than heading to the lounge for a digestif and a chance to discuss your impressions of the Seine with your like-minded companions? The evening cruise is delightful as we glide past more bucolic scenery, some of the finest France can offer. Should you wish why not visit the wheelhouse, the Captain is always delighted to explain to those interested how the highly sophisticated navigation and safety systems operate.

DAY 3 - ROUEN
We awake in Rouen, Normandy’s capital, one of Europe’s finest medieval cities and scene of many momentous events over the centuries. Pride of place on our guided tour of the city belongs to its stunning Gothic cathedral, which was immortalised by the great Impressionist Claude Monet in a series of 28 paintings showing the facade at varying times of day and in different weather conditions. Briefly becoming the world’s tallest building when the soaring spire was added in the 19th century, the cathedral is also notable for the recumbent statue reputedly containing the heart of Richard the Lionheart.

Rouen’s beautifully tangled alleyways are a revelation, lined with antique shops, tasteful boutiques and, of course, countless restaurants serving exceptional local cuisine emphasising the country’s outstanding gastronomic heritage. The Place du Vieux-Marché is one of the city’s most poignant spots; a large cross marks the point where the ‘Maid of Orléans’ Joan of Arc was burned at the stake for her beliefs.

During another superb lunch we cast off to navigate through yet more twists and turns, chalk cliffs and a landscape of forest-covered hills that are designated as areas of outstanding natural beauty and sanctuaries for diverse wildlife, including deer and wild boar. Another highlight of the valley soon greets us – the ethereal ruins of Jumièges Abbey. Founded in the 7th century, it was consecrated in the presence of William the Conqueror and was an important political and religious centre until it was sacked in the 16th century. In the late afternoon we moor in the pretty town of Caudebec-en-Caux, so after dinner why not take a stroll to explore this lovely spot, with its typical market square, richly decorated church and the Maison des Templiers, one of the oldest houses in Normandy.

DAY 4 - BAYEUX & ARROMANCHES
After breakfast you’ll be ready for a full-day tour exploring two of the most important aspects of European history – the Bayeux Tapestry and the D-Day landings. (Please note lunch is not provided today.) Bayeux itself is a delightful town with a historic core that escaped the ravages of war, so you can marvel at its many splendid buildings including the grand Gothic cathedral. But, of course, Bayeux is most famous as the home of the tapestry telling the story of the Norman invasion of Britain in 1066 in glorious detail. Among its 75 scenes are the coronation of Harold following the death of Edward the Confessor and his subsequent demise at the Battle of Hastings, which led to William of Normandy invading England and becoming king. The 230-foot-long tapestry is made up of nine panels of extremely delicate embroidery – gazing at its wonderful depictions of the battle and the period’s architecture, weapons and everyday life, you’ll appreciate why the Bayeux Tapestry is arguably the finest relic of the Middle Ages.

This afternoon we drive to nearby Gold Beach, one of the designated landing sites on D-Day, when Allied forces, the majority being American, British and Canadian troops, surged into Normandy to begin the liberation of occupied Europe. The target 50-mile stretch of the coast was divided into five sectors: Utah, Omaha, Gold, Juno and Sword. Casting your eyes across the sand to the water’s edge, it’s sobering to consider that on 6 June 1944 around 25,000 British troops came ashore on this one beach with 400 killed by the defenders. It has been estimated that by the day’s end approximately 156,000 Allied troops had successfully stormed Normandy’s beaches but suffered over 10,000 casualties - although more recent research suggests the figure may be significantly higher; it is now thought that there were over 4,000 Allied fatalities, the majority of which were sustained by American forces at Omaha, the largest of the beaches. At the western end of the shoreline is the village of Arromanches, where there is a museum dedicated to the ‘longest day’ and you can still see remnants of the two Mulberry harbours constructed for the landing craft. After a day recalling such momentous events and the stories surrounding them, thoughts turn again to the culinary delights awaiting you in the refined comfort of the ship’s restaurant.

DAY 5 - HONFLEUR
Honfleur is often regarded as the most picturesque spot on the northern French coast, and after breakfast we make the short journey to this delightful town. Its old harbour, sheltering both fishing boats and luxurious pleasure craft, is beautifully preserved and surrounded by a perfect waterfront of pastel-coloured 16th- to 18th-century houses, many converted to seafood restaurants. Watch the talented artists capturing the captivating views along the waterfront, while the intricate maze of streets behind is also well worth discovering. The eaves of the tall half-timbered buildings almost touch, and on the streets below is an abundance of traditional shops selling antiques, books and fine foods. Honfleur’s most famous son is Eugene Boudin, one of the forerunners of Impressionism and a friend of Claude Monet, who also painted the harbour many times.

After returning to the ship for lunch, we slip our mooring and begin our passage back upstream, retracing the river’s winding course, its huge variety of wildlife, enchanting scenery and forests, all reflected in differing colours in the sparkling waters. Villages slip by, birds glide on thermals rising from the surrounding cliffs and, as this ever-changing kaleidoscope slips by, it’s an ideal opportunity to join new friends for a chat. Squeeze in a spot of reading on the Sun Deck or simply recline, letting the gentle breezes lull you into a relaxing doze. By this stage of your cruise you’ll be totally unwound and modern life will seem very distant.

DAY 6 - GIVERNY & VERNON
One of the great delights of river cruising is the magical sensation of waking up in a different place from where you were the night before. This morning the ship has moored in delightful Vernon, and we take the short drive to Giverny to visit Monet’s garden and house. The artist himself called his garden his ‘most beautiful masterpiece’, and it’s certainly one of the world’s most photographed and painted, ideally viewed in the delicate morning light. In the Japanese-inspired water garden, shaded by great weeping willows and surrounded by bamboo, rhododendrons and azaleas, is the lily pond where he painted his extraordinary Les Nymphéas (Water Lilies) series. There’s ample time to wander here, absorbing the tranquil atmosphere while marvelling at the light bouncing off foliage of every hue and the magical reflections dancing off the water.

After another leisurely lunch on board, you can explore Vernon’s quaint buildings before embarking on our cruise to Paris. As the sun sets on the shimmering Seine and the Norman countryside recedes into dusk, it’s a perfect time to reflect on your few days cruising among the creamy chalk cliffs and charming villages of this splendid river.

DAY 7 - PARIS
We have arrived in Paris and this morning we take a sightseeing tour of this amazing capital, one of the world’s most iconic cities. The Eiffel Tower, Arc de Triomphe, Champs Élysées, Sacré-Coeur – you’ll see all these and much more. The grand Place de la Concorde, the largest square in the city, shows off 18th-century French architecture at its best, and just over the Seine on the Left Bank you’ll find the Musée d’Orsay, home of the world’s finest Impressionist art collection. Then there’s the eccentrically modern and yet stylish Pompidou Centre, famous not only for its exhibits but also for street entertainment. Notre-Dame Cathedral and the delicate spire of the sublime Saint-Chapelle dominate the Ile de la Cité, while the exquisite Tuileries Gardens are perfect for a stroll.

After lunch on board you could visit fine shops such as the Galeries Lafayette or those in the smart arcaded Rue de Rivoli, or perhaps wander around the café-lined streets of bohemian Montmartre. Paris is everything you imagine it to be – romantic, inspiring, vibrant – even outrageous – but best of all Paris is unique, and a fitting finale to a wonderful cruise. This evening is the Captain’s Dinner, hosted of course by the Captain himself. Featuring specialities of the regions through which we have travelled, it’s a truly memorable experience.

DAY 8 - RETURN HOME
This morning at the appropriate time, we disembark in Paris and you continue your onward journey. 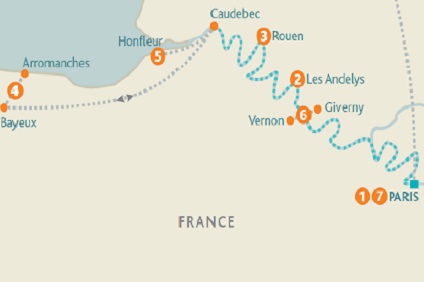