21 Night Cruise sailing from Istanbul to Barcelona aboard Viking Sky.

21 Night Cruise sailing from Istanbul to Barcelona aboard Viking Sky.

Visit ancient sites and cosmopolitan cities when you combine Ancient Mediterranean Treasures, Journey to Antiquities and Iconic Western Mediterranean into one captivating journey. See remarkably preserved ruins in Turkey and Greece, and call on some of the Mediterranean’s most beloved ports in Italy, Monaco, France and Spain. Overnights in Istanbul, Athens, Florence/Pisa and Barcelona allow you to fully explore the region’s wealth of cultural treasures.

Rhodes, Greece
Discover the Old Town of Rhodes today. This “Island of Knights” prospered from the wealth brought here from the Holy Land by the Knights of Saint John of Jerusalem. Follow the Street of the Knights to the most imposing building in Rhodes: the Palace of the Grand Masters, a UNESCO World Heritage Site. Tour this fascinating building, which was first a castle, then a royal palace. Our berth is near the city’s historic quarter, allowing you to linger at your leisure after your included walking tour. Or, opt to visit the Acropolis of Lindos; from its rocky perch, you will have magnificent views of the whitewashed village and harbor below.

Crete (Souda Bay), Greece
Explore Souda Bay today, an important port since antiquity because of its natural harbor and location along Mediterranean trade routes. Visit the remnants of the once-grand Palace of Knossos, the center of the Minoan kingdom that ruled over the island of Crete from approximately 2600 to 1100 BC. Or, tour an olive oil factory and winery to learn how these ancient Cretan traditions have been influenced by modern production techniques. Alternately, see the influences of former rulers such as the Venetians and Ottomans during a walking tour of Chania’s Old Town.

Olympia (Katakolon), Greece
Visit the quaint Greek port of Katakolon, huddled around a pretty little harbor dotted with colorful fishing boats. During your visit, venture into the fertile valleys of the western Peloponnese to the legendary city of Olympia, classical birthplace of the modern-day Olympic Games on the slopes of Mt. Kronos. Walk among the ancient city’s ancient ruins with an expert guide and historian, admiring the remains of temples, the Palaestra, or wrestling school, and the Gymnasium. You will gain insight into the very first Olympic Games at the fascinating museum.

Naples, Italy
In Naples, your choice of excursions abounds. Take in magnificent examples of Greek and Roman architecture and the Piazza del Plebiscito, the grandest public square in the city, facing the former Royal Palace of the King of Naples. Optionally, also explore Herculaneum, Italy’s “other” Pompeii, drive along the stunning Amalfi Coast, or take a trip to the summit of Vesuvius. In your spare time, sample a hot espresso, a slice of pizza (the world’s first pizzeria opened here in 1830) or a locally made limoncello.

Monte Carlo, Monaco
Enjoy a full day in Monaco, the playground for the rich and famous, as well as the gateway to the beautiful South of France. Visit medieval Monaco, stopping at the Prince’s Palace and St. Nicholas Cathedral, the burial site of the royal family, including American actress Grace Kelly. You will have time to step inside the Casino de Monte-Carlo, the most prestigious and celebrated gambling mecca on Earth. As an option, venture out of town to the legendary perfumeries in Grasse, or stroll along the English promenade in glamorous Nice.

Marseille, France
Visit Marseille, France’s oldest city, rich in timeless treasures. Discover its atmospheric Old Port, overseen by two 17th-century fortresses. The picturesque quay was built on the order of Louis XII and Louis XIII and is one of the world’s most romantic walks. As you explore, take in the beauty of its natural harbor, dotted with elegant yachts. Marvel at the church of Notre Dame de la Garde and Palais Longchamp, or venture to Aix-en-Provence with its tree-shaded squares and wide boulevards.

Montpellier (Sète), France
Explore Montpellier today, a center of learning for centuries. Its namesake university, founded in 1160, is one of the world’s oldest, predating the Renaissance. The social and cultural center of Montpellier is the Place de la Comédie, anchored by the elegant Three Graces fountain and the stunning, neoclassical Opéra Comédie. Other sites pay tribute to a rich heritage, from the art-filled Musée Fabre and impressive St. Clement Aqueduct to the St. Pierre Cathedral with its “floating” porch supported by a pair of towers. 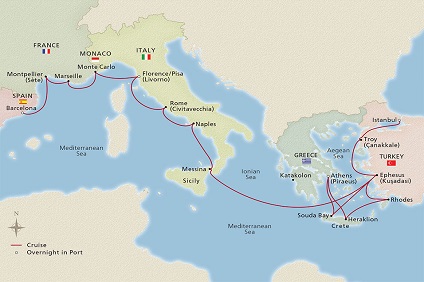