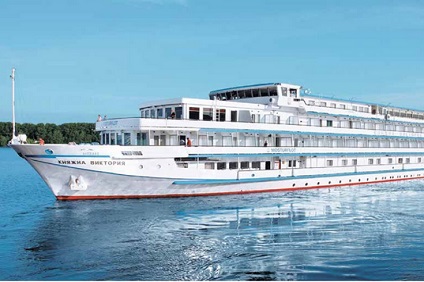 Day 1 Arrive St Petersburg
The City of Tsars. The Venice of the North. Russia’s hub for the arts. However which way you describe St Petersburg, it certainly does not disappoint. Make your way to your hotel. This evening, come together to share a welcome dinner, where you will have the opportunity to get to know your fellow travellers.

Day 2 St Petersburg
Embark on a city exploration, where you will see attractions such as St Isaac’s Cathedral, the Nevsky Prospect and Palace Square. You will also visit Peter and Paul Fortress, as well as the Church of the Savior on Spilled Blood. Afterwards, take a guided tour of the imperial estate, Peterhof Palace, laid out on the orders of Peter the Great. Later, the time has come to board your river ship.

Day 3 St Petersburg
SIGNATURE EXPERIENCE
Here, go inside before the museum is open to the public and take in the exclusive Hermitage Peacock Clock Ceremony. Acquired by Catherine the Great, the Peacock Clock is a large automated clock featuring three life-sized mechanical birds.

Take a Hydrofoil ride on the Neva River to the State Hermitage, the second-largest art museum in the world and home to Russia’s royal art collection of more than three million works. After a special experience here, tour the museum. Spend the afternoon at leisure. For something special this evening, appreciate Russia’s arts scene and attend a private ballet performance at the Hermitage Theatre, one of the oldest theatres in St Petersburg.

Day 4 St Petersburg
FREEDOM OF CHOICE™
Join a discovery of the lavish Catherine Palace and grounds, constructed in the 18th century as a summer palace for the Empress. Alternatively, you may wish to visit the Fabergé Museum, home to the world’s largest collection of pieces by Peter Carl Fabergé.

After breakfast today, head out to enjoy your chosen activity.

Day 5 Lake Ladoga, Mandrogi
After cruising through the night, dock in Mandrogi, located within a dense forest on the banks of the Svir River. Famous for its towering churches, most of Mandrogi was bombed by German forces in World War II. Here, visit the Vodka Museum that houses more than 3,000 different varieties, then spend time at leisure to look around the village.

Day 6 Lake Onega, Kizhi Island
Situated on Lake Onega, Kizhi is home to some of Russia’s iconic wooden architecture. Once declared a parish centre for the Russian Orthodox Church in the 16th century, it survived a rebellion until the 1950s, when most of the island’s residents left, leaving behind impressive wooden relics. Explore the open-air museum and marvel at the World Heritage-listed Transfiguration Church, built in 1714 without the use of a single nail.

Day 7 White Lake, Goritsy
FREEDOM OF CHOICE™
Visit the Monastery of St Cyril on the White Lake and its Museum of Icons. Alternatively, take a walking tour of Goritsy, including a visit to a local school.

Today cruise onto the White Lake, then dock in Goritsy, a peaceful farming town. Here, set out on your preferred activity.

Day 8 Yaroslavl
Make a stop in the historic Golden Ring city, Yaroslavl. Founded by Prince Yaroslav the Wise in 1010, this is one of Russia’s oldest cities, tracing its origins back to the Vikings. Here, a sightseeing exploration illuminates the city’s history through its glorious architecture, including Spassky Monastery and the Church of Elia the Prophet.

Day 9 Uglich
FREEDOM OF CHOICE™
On a guided discovery, visit the Kremlin and the Church of St Demetrios on the Blood. Alternatively, you may wish to visit the Hydropower Engineering Museum.

Dock in another Golden Ring city, Uglich, where you can pick the sightseeing that best suits you.

Day 10 Moscow
Dock in Moscow this afternoon as you arrive at your final destination on this journey. Enjoy an insightful guided exploration of Red Square and St Basil’s Cathedral.

Day 11 Moscow
FREEDOM OF CHOICE™
Perhaps gain an insight into the history of space exploration with a visit to the Memorial Museum of Cosmonautics, situated at the base of a 100-metre titanium obelisk. Alternatively, explore Tretyakov Art Gallery, Russia’s national gallery.

On a guided tour of the Armoury Museum, venture inside the walls of the Kremlin, a historic fortified complex that was once the royal residence of the Tsars. Later, you will have a choice of sightseeing.

Day 12 Moscow, Disembark Ship
Set out on a morning discovery that allows you to marvel at some of Moscow’s unique Metro stations, which feature chandeliers and marble statues. Later, perhaps tour a Cold War bunker or enjoy free time to explore Moscow. An evening of fun awaits at tonight's farewell dinner, where traditional Russian folklore performers will dazzle you. 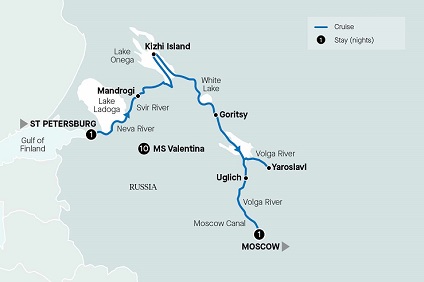