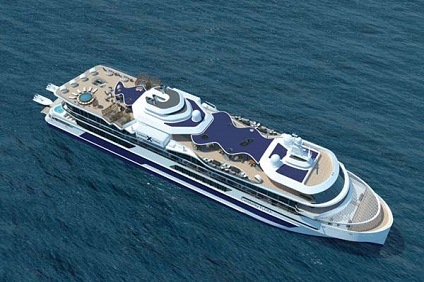 Celebrity Flora℠ marks an evolutionary turning point in the approach to ship design—creating a sense of being truly immersed in the destination, instead of just visiting it. Indulge in the largest and most luxurious accommodations in the Galapagos Islands, where every stateroom on board is a suite. Dine on delectable menus, curated by a Michelin-starred chef, and allow your Personal Suite Attendant to help you unpack. All this to ensure that your visit to these primitive islands
is anything but.

DAY 1 SUNDAY AM - Baltra Island / Embarkation
During World War II, Baltra served as a U.S. military base protecting the Panama Canal from enemy attack. Now the cactus-strewn landscapes of Baltra are home to the region’s main airport and where you will meet the ship. From the airport, it is just a short bus and Zodiac ride to the ship.

DAY 1 SUNDAY PM - Daphne Island
Daphne is a satellite volcanic cone located north of Santa Cruz Island. The crater floor is an important breeding site for blue-footed boobies. This Island is famous for the scientific investigation led by Peter and Rosemary Grant on the finches’ population, one of the most important studies on the field that supports Charles Darwin’s Theory. The cliff shore of the island is home for sea lions, pelicans, blue-footed boobies, and tropical birds which can be observed during the circumnavigation of the island.

DAY 2 MONDAY AM - Gardner Bay, Española Island
A long white sand beach and clear blue waters make this an ideal spot for swimming, snorkeling, or just relaxing on the beach. In the water, sea turtles, rays, colorful tropical fish, and maybe even a white-tip reef shark may be seen. It is also home to a colony of sea lions. Excursion options: beach walking, swimming, or a deep-water snorkel for experienced snorkelers.

DAY 2 MONDAY PM - Suarez Point, Española Island
Española is the oldest island in the Galapagos and home to an abundance of wildlife. At this site, visitors can expect to see sea lions, Galapagos Hawks, marine iguanas, and both blue-footed and Nazca boobies.

Between late March and the following January, the Waved Albatrosses come here to mate and raise their young. Excursion options include a long, rocky walk to look for albatrosses and observe an impressive blowhole that spews water like a towering geyser.

DAY 3 TUESDAY AM - Cormorant Point, Floreana Island
Floreana was the first capital of the Galapagos, and where Charles Darwin met the islands’ Governor. Its small brackish lagoon is often home to flamingos, stilts, and white-cheeked pintail ducks, and one of its beaches is a highly used nesting site for sea turtles. Check out the green-hued sand where you land! Excursion options include a relatively short walk to the lagoon and sea turtle nesting beach, and optional snorkeling and swimming at the landing beach. In addition, nearby Champion Island lies east of Floreana and provides a wonderful opportunity for snorkeling and a zodiac ride. When snorkeling, tropical fish abound with frequent sightings of sea turtles, rays, sharks, sea stars, and more. If we’re lucky, the sea lions will be in a playful mood.

During a zodiac ride along the rocky shoreline, keep an eye out for seabirds such as boobies, pelicans, and frigate birds. Red-billed Tropicbirds nest in the crevices below the large prickly pear cacti, and you may spy the very rare Charles Mockingbird.

DAY 3 TUESDAY PM - Post Office Bay, Floreana Island
Rich in history, this site is home to the post office barrel established in about 1793, where pirates, buccaneers, whalers and others could leave their mail to be picked up by outbound ships. The tradition continues today, as visitors leave addressed postcards in the barrel and sort through left mail to deliver at home.

Baroness Outlook, Floreana - The Baroness’ Viewing Point is the ideal place to take in the unique scenery that defines Floreana, and to learn about the history of the island’s early settlers. Once inhabited by an indulgent baroness and her three lovers, the history of this island is intriguing. During the Zodiac ride around “La Loberia,” you can observe several marine species such as golden eagle rays, sea turtles, sea lions, mullets and occasionally Galapagos penguins.

DAY 4 WEDNESDAY AM - Moreno Point, Isabela Island
Along this beautiful rocky shore, a field of hardened black lava flows is pockmarked by shallow pools, which are home to shorebirds and flamingos. The mangrove-lined shore also provides a chance to see marine iguanas, sea turtles, stingrays, sharks, penguins, and the flightless cormorant. Excursion options: a long walk and Zodiac ride, or an extended Zodiac ride.

DAY 4 WEDNESDAY PM - Urvina Bay, Isabela Island
Composed of five coalesced volcanoes, this is the largest island in the Galapagos and the most recently active, the latest eruption having occurred in 2009. Here we will see large land iguanas, finches, and if lucky, a giant tortoise or two. In 1954, the intrusion of magma below one of the islands volcanoes caused part of the bay to be uplifted some 6 meters, and today we can walk through the remains of what was once a thriving underwater reef. Excursion options: a long, faster-paced hike with some rock climbing required, followed by an optional snorkel (if conditions allow), or a short walk and optional snorkel.

DAY 5 THURSDAY AM - Espinoza Point, Fernandina Island
Fernandina is the youngest island in the Galapagos and, as Darwin wrote, it is “covered with immense deluges of black naked lava.” Along with its extraordinary black lava rocks, this point of land hosts the largest colony of marine iguanas in the Archipelago, along with sea lions and a nesting site for flightless cormorants. Excursion options: a long walk or short walk, as well as a deep-water snorkel for experienced snorkelers.

DAY 5 THURSDAY PM - Vicente Roca Point, Isabela Island
The half-collapsed remains of an ancient volcano make for a spectacular setting at this site. Awe-inspiring cliffs, blue waters, and wildlife create a Zodiac ride to remember as we search for sea turtles, penguins, fur seals, the flightless cormorant, marine iguanas, marine mammals, and the oddly shaped form of the elusive sunfish.

DAY 6 FRIDAY AM - South Plaza, Santa Cruz Island
One of two islands off Santa Cruz, South Plaza was born of upheaval, uplifted during a geologic event. The rocky island is strewn with prickly pear cactus and home to land iguanas, marine iguanas, and a colony of sea lions. Our excursion here is a short walk to view wildlife, FloraSM, and geology.

DAY 6 FRIDAY PM - Dragon Hill, Santa Cruz Island
Dragon Hill, or “Cerro Dragon,” is named after its population of land iguanas. The site offers a beautiful view of the landscape and two small brackish lagoons where flamingos and other shore birds occasionally feed. Along the trail, we’ll cross a beautiful “white forest” of Palo Santo (incense) trees and Galapagos cotton plants. Options for this visit include a long walk and a short walk.

DAY 7 SATURDAY AM/PM - Puerto Ayora, Santa Cruz Island
This is the main population center of the islands, and home to the National Park Service tortoise-breeding center and the Charles Darwin Research Station. You will be able to visit the tortoise-breeding center and walk through the Charles Darwin Research Station. You will also have the opportunity to take a bus ride to the highlands to observe giant tortoises in the wild and walk through a lava tunnel. In addition, you will have an exclusive opportunity to participate in the Scalesia reforestation project in the highlands of Santa Cruz Island.

DAY 8 SUNDAY BALTRA DISEMBARKATION - Baltra disembarkation / Airport transfer for flight home
Baltra is home to the region’s main airport, and where you will fly out. You will have a zodiac and bus ride to the airport. 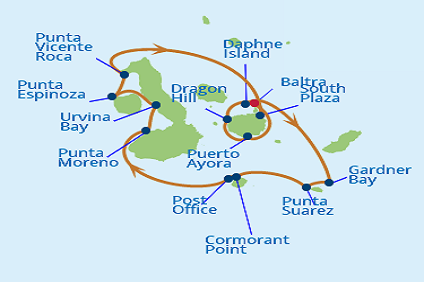