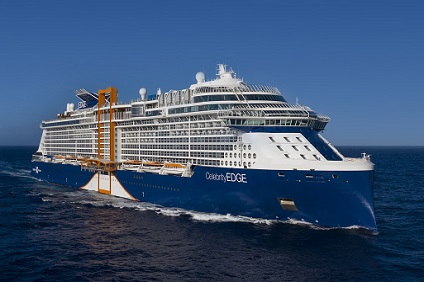 Celebrity Cruises, the company that brought you modern luxury cruising, has done it again. Introducing a revolutionary new ship that’s poised to change the way you experience the world—and a new class of ships designed to shatter all expectations.

When it came time to choose a name for this visionary vessel, we looked to the very thing that makes this ship so unique: the fact that during two years of exploration and excitement, every single design element has been taken to the leading edge of possibility. The name was right there in front of us.

Celebrity Edge. The first in our new Edge Class of ships designed to leave the future behind.

Rome (Civitavecchia), Italy
Civitavecchia was settled in 108 A.D. by the Emperor Trajan and has since served faithfully as a gateway to the capital of the Empire - Rome. Once the center of the Ancient World from which emperors ruled over nearly all of western civilization, Rome is still a cultural mecca. Stroll the ancient halls of the Colosseum or gaze upon the ceilings of the Sistine Chapel.

Kusadasi (Ephesus), Turkey
Once the capital of the Roman province of Asia Minor, this coastal town is now an archeologist’s dream. The UNESCO World Heritage ruins of Ephesus impress even those familiar with the world's other ancient cities. Though excavations have been underway for 150 years, only 20 percent of the city has been uncovered. This former Greek banking and trading center is rich with historic sites, including the Great Theater, the Temple of Hadrian, and the Temple of Artemis, one of the Seven Wonders of the Ancient World. On your Europe cruise, check out the the Celsus Library — built in 117 A.D.— made up of towering columns highlighted by the statue of the goddess of wisdom.

Istanbul, Turkey
In exotic Istanbul, you could spend an entire day strolling through the Grand Bazaar, exploring the famous Blue Mosque, or wandering through the majestic Topkapi Palace, with its gardens, libraries and 400-room harem.

Santorini, Greece
Here on the island of Santorini, you’ll find a classic Greek seascape—whitewashed houses accented by sea-blue roofs. This is a treasure trove for both professional and amateur archeology buffs, with sites that include tombs that date back to the 9th century and the sanctuary of Apollo.

Mykonos, Greece
Mykonos is known for its whitewashed villages sprinkled with blue and jade green. It's also famous for its sophisticated nightlife. The most popular island in the Cyclades is bustling with activity, awash in beautiful alleyways, and home to alluring sandy beaches.

Athens, Greece
Athens brought the world drama, history, poetry, and philosophy. Once home to the world's most powerful and civilized empires, Athens is now the world's foremost archaeological playground. The towering columns of the Parthenon still stand in homage to the virgin goddess Athena. The Parthenon sits atop the Athenian Acropolis and watches over the city where it can be seen from just about anywhere in Athens. Make it a point to visit the incredible Acropolis Museum on your cruise to Athens. The joint effort between two architects, one American and the other Greek, this outstanding building was completed and opened to the public in 2009. It focuses primarily on the Greek period dating to 5 B.C., considered to be the apex of art, culture, and philosophy in ancient Greece, but it also has artifacts from the Bronze, Roman, and Byzantine Ages. There’s even a Plexiglas walkway from which an excavated section of an old Athenian neighborhood can be viewed. In addition to an abundance of historical riches, modern Athens has plenty on offer—from scenic beaches to restaurants with superb Mediterranean cuisine and bustling central markets.

Naples, Italy
Framed by Mount Vesuvius along a dramatic skyline, the 2,800 year-old port city of Naples is chock full of historical sites, churches, and museums that make it an incredible place for you to explore. And in the region where pizza was first invented, you know the food is going to be incredible. Just 35 miles down the coast, Salerno offers you a rich history but also boasts a marvelous collection of parks, natural wonders, and unique vantage points to take in the beauty of the Tyrrhenian Sea. Two cities. One incredible stretch of Italian coastline.