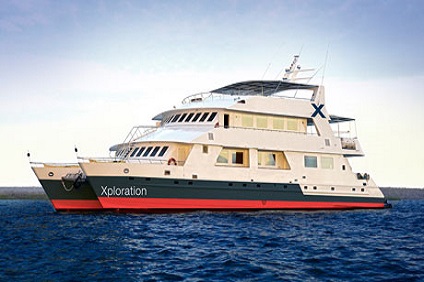 Celebrity Xploration: Outfitted with a wealth of luxuries that cater to her 16 guests, designed not just for travel, but for exploration of the Galapagos Islands,her environmentally sound design helps preserve this immaculate archipelago.

The main airport of the Galapagos Islands is located on Baltra island. There are a few souvenir shops near the airport, however most people just stay long enough to take the bus to Puerto Ayora on Santa Cruz (Galapagos) or to the docks to go to their cruiseboat.

Punta Espinoza
Punta Espinoza is located on Fernandina Island, the youngest and most volcanically active island of the Galapogos Archipelago.

It has an amazing combination of barrenness with lots of wildlife and can be considered to be one of the most pristine and beautiful places on our planet.

Having no introduced mammals, Fernandina Island has a unique setting with the highest density of marine iguanas, sea lions share their habitat with crabs and hawks.

Punta Espinoza is a narrow ledge of lava and sand that extends from the base of the volcano to the sea. It is located north-east of Fernandina, the third largest island in the Galapagos. Punta Espinoza is crossed by a canal from Tagus Cove.

Named in honor of King Ferdinand, who sponsored the voyage of Columbus, Fernandina has an area of 642 square kilometres and a maximum height of 1,494 metres.

This narrow strip of land is where hundreds of marine iguanas congregate in large groups. The famous Flightless Cormorant inhabits this island as well as penguins, pelicans and sea lions.

Different types of lava flows can be observed. There are also mangrove areas. It is an ideal place to observe the lava cactus growing on such young lava and survive with little water.

The active volcano here is one of the world's most active. The last recorded eruption occurred in Fernandina in May, 2005 and lasted three days. The biggest eruption was in 1968, where two thirds of the floor of the caldera collapsed inwards to a depth of 300 metres.

Isla Santiago
Santiago Island is an island of the Galápagos Islands. It is popular with tourists due to its numerous landing sites. Marine Iguanas, sea lions, fur seals, land and sea turtles, flamingos, dolphins, and sharks are found here.

Puerto Egas, south of James Bay and west side of Santiago, is one of the best sites. There is a long, lava shoreline where eroded rock formations house an excellent variety of wildlife. Marine iguanas bask in the sun while land iguanas scatter around feeding on exposed algae. The tide pools contain many Sally Lightfoot crabs, which attract other types of hunters. Following the trail Fur seal lions are found. Puerto Egas is not only a good spot for taking pictures but also perfect for snorkeling and seeing many species of tropical fish.

Sullivan Bay, Espumilla beach and Buccaneer’s Cove are other visitor sites on the island. Cousin's Rock is a well known dive site and is situated off the east coast of Santiago. It is a triangular rock that rises about 10m out of the water and is made up of many layers of volcanic rock.

North Seymour
North Seymour is a small islet located just north of the Baltra airport in the Galapagos Islands. It is an extraordinary place for breeding birds and is home to one of the largest populations of nesting Blue-Footed Boobies and magnificent frigate birds.

The visitor trail on North Seymour is approximately (2 km) in length crossing the inland of the island and exploring the rocky coast. Returning to the coast ,Daphne Major and Minor can be spotted off in the distance, and body surfing sea lions and marine iguanas can be seen. 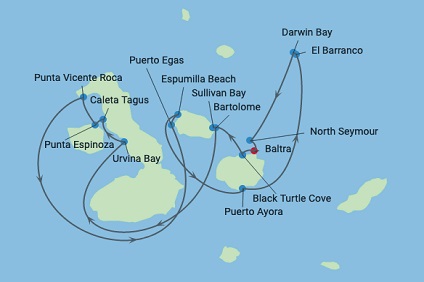