7 Night Cruise sailing from Phuket to Singapore aboard Star Clipper.

7 Night Cruise sailing from Phuket to Singapore aboard Star Clipper.

Star Clipper is as fleet as the wind and as graceful as swans. This is a true clipper ship, reflecting the proud heritage in every inch of polished brass and gleaming brightwork.

Step aboard this unique vessel and discover a new age of sail, where the traditions of the past are happily married to the comforts and amenities of the present. Star Clipper ia a modern cruise ship in every way, created for comfort-loving passengers who also love the traditions and romance of the legendary era of sailing ships. Star Clipper is 360 feet long and carries just 170 guests in pampered comfort. Life aboard is blissfully relaxed, much like travelling on a private yacht. You’ll never feel confined, as the ship offers pleasingly spacious accommodation and expansive teak decks with ample space for relaxing and play. In fact, you’ll find that the ship offers more outdoor space per passenger than most conventional cruise ships.

Phuket - Patong Bay
Phuket, Thailand’s largest island, lies in the Andaman Sea and is joined to the mainland by a causeway. The landscape is one of lush green hills, coconut groves and rubber plantations, with a coastline dotted with a dozen spectacular beaches. Phuket is a holiday paradise with the lively area of Patong providing the up-beat resort life with its many shops, restaurants and bars, leaving the rest of the island to show off her natural beauty and unspoiled culture.

Ko Similan
The Similan Islands, or Nine Islands as they are also known because of their number, nestle in the Andaman Sea to the north of Phuket and are world-renowned among diving enthusiasts for underwater sightseeing. Accessible only by sea, The Similan Islands are stunningly beautiful with scenes straight out of your dreams of a tropical paradise.

Phang Nga
Phang Nga Bay is a large, lovely body of water that seems different in every change in weather and light. There are many secluded islands that can be explored at your leisure. In these areas, where only the occasional fisherman is seen, wildlife is plentiful. Phang Nga Bay is one of the most popular tourist destinations in southern Thailand. The tourists see the famous "hongs", or inner island lagoons in some of the islands, and make the obligatory trip to see "James Bond Island".

Ko Hong
Ko Hong (“hong meaning room”), part of the Ko Hong archipelago is so named because of its large internal lagoon. One of the prettiest bays in the area, huge monolithic rocks provide shade all day long on a beautiful white silica sand beach.

Ko Adang
The Butang Group of islands is about as far south as you can go on the western coast of Thailand. Protected by the Ko Tarutao National Park, this 61-island archipelago is only a stone’s throw from the Malaysian border and way, way off the radar screen of tourist groups. The only habitations on Ko Adang are the Park offices and since there aren’t many visitors, the pristine beaches and deserted coves are all yours.

Penang
“The Pearl of the Orient” lies off the northwestern coast of Malaysia and is linked to the mainland by one of the longest bridges in the world. The capital, Georgetown, bears the stamp of a mixture of foreign influences and boasts a 65 story skyscraper called the Komtar, a complex of department stores, restaurants, theatres and squash courts. In total contrast, this beautiful island is home to one of the finest Buddhist temples in south-east Asia, Kek Lok Si Temple.

Malacca, Malaysia
Malacca. The Spice Trade. The two are inseparably associated. From the time of the early Renaissance explorers onward, it was the control of the Malaccan Straits that dictated who would own the most precious treasures of the Orient, its spices. The Portuguese, the Dutch and the British ruled Malacca at one time or another. Explore opulent private mansions built in the distinctive Peranakan colonial style and filled with priceless Chinese antiques.

Singapore
Singapore City was founded in 1819 by Sir Stamford Raffles of the British East India Company, who recommended that different areas of the town be set aside for the various ethnic groups. The best way to experience the remarkable diversity of the city is on foot: the traditional architecture, customs and cuisine of the various ethnic areas form a fascinating contrast with the lavish, space-age shopping centres of Orchard Road and Raffles City. 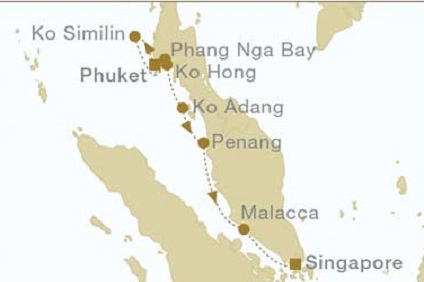