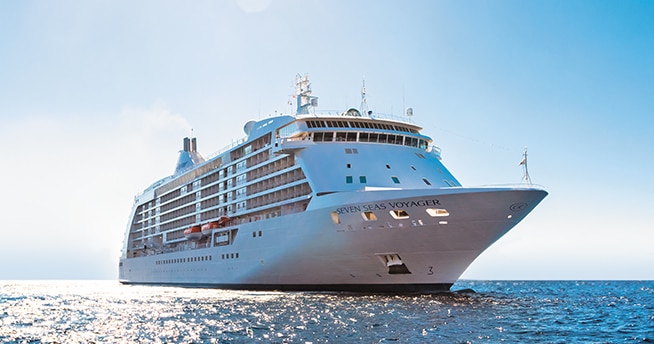 The luxurious Seven Seas Voyager® harbors overtones of elegance throughout, from the refined Penthouse Suites to the modern touches of the Voyager Lounge.

Holyhead, Wales
Holyhead stands on the far side of Anglesey, which is technically an island separated from Wales by the narrow Menai Straits. The distant mountains provide an ever-present backdrop, enticing the visitor to investigate their beauty. The rural charm of North Wales is juxtaposed with some unexpected features, for, perhaps to the casual visitor's surprise, this is an area that has participated in some of the great moments of our history.

Liverpool, England
Liverpool is a city and metropolitan borough in Merseyside, in North West England, along the eastern side of the Mersey Estuary. Inhabitants of Liverpool are referred to as Liverpudlians and nicknamed "Scousers," in reference to the local meal known as 'scouse', a form of stew. In 2004, Liverpool's waterfront was declared as a UNESCO World Heritage site, reflecting the city's importance in the development of the world's trading system and dock technology.

Killybegs, Ireland
Fishing trawlers crowding Killybegs Harbour will herald your arrival in Ireland’s largest fishing port, but long before that, the majestic headlands, beaches and villages of Southwestern Donegal will have made this place memorable. You can revisit the glorious history of Donegal Carpets at the Killybegs International Carpet Making & Fishing Centre, then, after a fresh seafood feast in town, witness the spectacular Sliabh Liag cliffs that tower almost 2,000 feet above Donegal Bay.

Ullapool, United Kingdom
With a population of 1,500, Ullapool is a small port town but would be considered large compared to many villages in the Scottish Highlands. Situated on the banks of Loch Broom surrounded by mountains, Ullapool is fronted by rows of whitewashed, black-roofed façades that invite you to spend a pleasant day learning the town’s history, shopping for locally made gifts and feasting on hand-dived scallops. Set out from Ullapool in almost any direction and you’ll find yourself amid the spectacular scenery of the Scottish Highlands, where you can follow a river to a 30-foot cascading waterfall or head to the coast for a splendid day at the beach.

Kirkwall (Orkney Islands), Scotland
Kirkwall is the largest town and capital of the Orkney Islands, off the coast of northern mainland Scotland. Kirkwall is one of the most attractive and well-preserved small towns in Scotland. Apart from the main historical buildings, there are many 17th-18th century houses and other structures in the local vernacular style. Kirkwall also has the most northerly of the English speaking world’s Carnegie libraries, which was visited and opened by Andrew Carnegie and his wife in the early years of the 20th century.

Lerwick (Shetland Islands), Scotland
Explore Stone Age ruins, heather-covered moors and the rugged Scottish highlands in Lerwick, capital of the Shetland Island Archipelago. With its dramatic cliffs, Grand Victorian houses, charming Shetland ponies, and Nordic heritage Lerwick offers hours of entertainment. Set off on your own to get an historic overview at the Shetland Museum and Archives on the waterfront. Stroll through the numerous galleries and quaint shops looking for unique art, fine hand knitted sweaters made from the wool of Shetland Sheep and beautiful knitted lace. The local-made beer and whiskey is well worth a visit to a pub.

Invergordon, Scotland
Invergordon has a tremendous history stretching back through two World Wars. Ideally situated in the center of the eastern Highlands, Invergordon received its name from Sir William Gordon, a landowner of the 18th century. For centuries the estate on which Invergordon now stands was known as Inverbreakie, or “the mouth of the Breakie.” The Breakie presumably is the stream which enters the Firth at Rosskeen Bridge, near the old parish church west of the present Town.

Edinburgh (New Haven), Scotland
Edinburgh is Scotland’s bustling capital city, renowned for its culture and traditions. At the center of the city, explore the World Heritage Site of Old Town and its historical area known as `Royal Mile` as you pass delightful multi-storied houses and quaint side streets. You may also visit the impressive St. Giles Cathedral, dating from the 14th and 15th centuries, and known for its famous crown spire. Discover the Palace of Holyrood House, Scotland's primary Royal Palace. Dating from the late 15th century, it is the official Scottish residence of the Queen.

Tyne (Newcastle), United Kingdom
United by seven bridges, Tyne (Newcastle) is an exciting and diverse destination. One would never guess that this once shipbuilding city, is home to a vibrant nightlife, premium restaurants serving cuisine from around the world and fantastic galleries. Visit the Castle Keep, one of the country's finest examples of a Norman Keep. Or go to The Sage Gateshead for lively entertainment day and night. And with more theaters per person than anywhere in the UK, you will find world-class productions to suit all tastes.

London (Southampton), England
Southampton is the largest city and port on the south coast of England. Tour the historic byways of Old Town with its Medieval walls and Tudor architecture. Spend an hour or two meandering along the pathways of Royal Victoria Country Park, picturesquely set along the waterfront on the grounds of a former military hospital where Florence Nightingale once worked. Southampton's maritime past can be explored by strolling along the Town Quay with its marina and lively bars and restaurants. It was here that the Titanic departed on its fateful journey and where the Mayflower sailed for the New World.